The People Who Are Afraid of Food (Medium.com)

Home Eating Instinct The People Who Are Afraid of Food (Medium.com)

The People Who Are Afraid of Food (Medium.com) 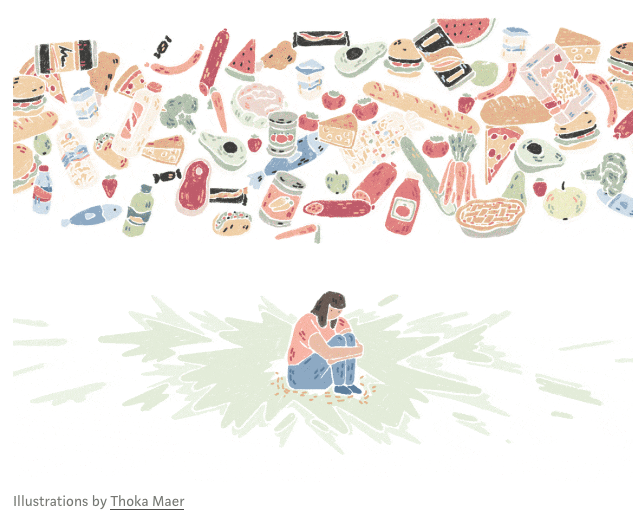 The restaurant in southeastern Virginia is the kind of place that makes its own fresh-squeezed juices and has kale on the menu in three different places. The waiter lets diners know that any grain dish can be made gluten-free. As he takes orders, the dishes, from octopus ceviche with wasabi dressing to pan-roasted salmon with quinoa and lemon aioli, are complex. Elyse, a 29-year-old sales executive, reluctantly opens her menu and prays. Please let there be a kids’ section. Please tell me they have regular fries.

This is a work lunch for Elyse; her dining companions are prospective clients, and she wants to make a good impression. She does not want to give the speech she’s given a million times, answer awkward questions, or pretend not to notice the puzzled looks that follow after she orders her meal. But Elyse can’t bring herself to eat seafood, meat, or most kinds of dairy. She eats no vegetables and few fruits, unless they’ve been pureed into a smoothie. “I’m almost 30 years old,” Elyse says. “And I still eat like a toddler.”

Most days, Elyse drinks a smoothie for breakfast, has potato chips and chocolate milk for lunch, and makes a tray of potatoes roasted with olive oil, plus another smoothie, for dinner. She also eats bread, crackers, chips, mixed nuts, and popcorn. “It used to be french fries every lunch and dinner,” Elyse says. In high school and college, she went to McDonald’s twice a day, nearly every day, to get fries. “I always wondered what the people who worked there thought of me,” she says. “I mean, they aren’t going to judge you for eating fries, but at a certain point I’m sure they wondered, ‘Does this girl eat anything else?’”

Elyse switched from fries to roasted potatoes when, at age 25, she needed to have her gallbladder removed. She suspects her gallstone developed at least in part because of her fast-food diet, although it may have been hereditary, as other members of her family have needed the same procedure. “I try not to eat french fries too often now, but in restaurants it’s often my only option,” she says. Elyse employs a few tricks to escape notice: She likes to sit in the corner of the table so fewer people have a view of her plate. And she’ll scoot fries around to make an empty space so maybe people will think she ordered a burger and ate it quickly. But there’s no hiding when the food comes out and everyone else at her table picks up their forks. “And I’m sitting there, eating with my fingers.”

Elyse has eaten this way for as long as she can remember. But until a therapist diagnosed her eating disorder last year, nobody knew why. When she was growing up, doctors and family friends told her parents they just needed to be more strict. But when her parents did try to force her to eat, Elyse gagged or vomited up every bite. She avoided sleepovers or birthday parties. Sometimes the other kids’ parents pushed her or thought she was being rude.

“I was always so ashamed of how I ate. When you navigate those weird questions and stares every day, it becomes part of your identity that you are weird and wrong in some way,” says Elyse, who asked me to change her name because she fears the stigma attached to her eating habits. “All my life, I’ve been told that eating this way will kill me. People said I wouldn’t live to age 30.”

Elyse says the people around her making such comments never meant them maliciously. Sometimes it was said as a joke — her pediatrician liked to say that Elyse “lived on air” — sometimes, in desperation, by a loved one who despaired of her food choices. “I suspect, often, they just weren’t thinking about how terrifying and shameful it is for a kid to hear I might die for something that’s ‘all my fault’ but feels impossible to change,” Elyse says. “I’ve never known what it is to not be afraid of food.”

Read the rest of my story, The People Who Are Afraid of Food, over on Medium now.

And be sure to check out my forthcoming book, The Eating Instinct: Food Culture, Body Image and Guilt in America, for much more on these new eating disorders and how they feed off our obsession with healthy food.