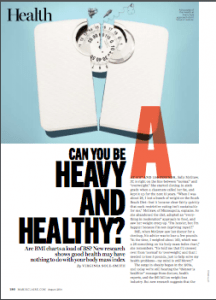 Some Thoughts on What Makes a “Healthy Size.”I’ve been writing about the Health At Every Size movement for several years now. (Pictured above is a feature I wrote for Marie Claire in 2014; here are the archives of the body image blog I wrote for the now-defunct iVillage back in 2011.) And I’m revisiting it again this month because I’m writing the book’s chapter on obesity, and what it’s like to eat when you live in a larger body. So I thought I’d talk about it a little here, in case you’re not familiar with it. Health At Every Size (HAES for short, and I’ve heard it pronounced “hace” or “has”) is part public health strategy and part social justice movement. Proponents argue that we should let go of our national obesity obsession and focus on healthy habits (like eating well and moving more) to pursue improved health directly, regardless of whether we lose any weight in the process.

The key principles of HAES originated with a book of the same name by Linda Bacon, PhD, a researcher and nutritionist based on San Francisco, who sifted through decades of data on obesity and health and concluded that the link between the two is much weaker than most of us think. Bacon and many others argue that it’s not the literal excess pounds sitting on your body that cause heart disease, diabetes, and all of the other health conditions we think of as obesity-related. Rather, all of these conditions are caused by poor dietary choices, lack of exercise, and most importantly, a societal framework that makes pursuing health pretty difficult if you’re not also wealthy, educated, and otherwise privileged.

Here’s the thing: I can’t even tell you how long it took me to get the wording right in the above paragraphs and I probably still didn’t nail it. Bacon gets much closer in her new Body Manifesto video series, so that’s definitely worth a watch if you’re new to all of this and find yourself automatically disagreeing with everything I just wrote. But one big drawback to this movement (besides its awkward acronym) is that there’s something about HAES that is weirdly hard to boil down to a couple of sentences. I think it’s because our beliefs about weight and health are so deeply intertwined. First you have to explain that being fat might not be as bad for our health as we’ve been taught to think. Then you have to explain that of course, you’re not saying everyone who is fat is healthy (though researchers at the University of Alberta and elsewhere have shown that around 25 percent of obese people and 50 percent of overweight people actually are). Nor does HAES give people a license to eat whatever they want and stop exercising. It says that you should stop dieting and exercising with the express goal of weight loss in mind. Because — and this may be the real kicker — losing weight in any permanent sense seems to be pretty much impossible. I’m going to get deep into this research in the book, but for now, trust me: Most dieters lose, at best, 10 percent of their body weight (which, if you start out at 300 pounds, is not going to make you a supermodel). And somewhere between 85 and 95 percent of all dieters regain the weight, plus extra, within five years. In fact, weight loss is so hard to achieve that when we make it our primary health goal, we’re less likely to stick with healthy habits like exercise, as motivation scientist Michelle Segar, PhD argues here. Because if we don’t lose the weight, why keep hitting the gym?

So even in cases when being fat is a clear cause of health issues, losing weight isn’t a realistic or attainable solution.* That’s a depressing message. But the idea that you can improve your health and resolve many of those issues even if you don’t lose lots of weight just by making lifestyle changes? I feel like that should be such good news for most of us. And yet, it’s not always received that way. Telling people to give up on weight loss feels somehow antithetical to the American Dream. We know most of us will never have Hollywood bodies. We know dieting and obsessive exercising feels hard and punitive. But we can’t quite believe we should ever stop trying.

Want to Be In the Book?

I’ve looking for some specific interview subjects at the moment, so figured I’d put those call-outs here:

*For the aforementioned obesity chapter: A man who has undergone weight loss surgery and is willing to discuss his experience (good or bad).

*For an upcoming chapter on how we use food as medicine: I’d like to talk to anyone who has ever cut a major food group (like dairy or gluten) out of their diet, but ultimately concluded that it did not help solve any particular health issue. Or maybe you felt like the benefit was inconclusive, but found an elimination diet too restrictive or otherwise problematic to continue.

(Lest both those call-outs sound like an awfully biased way to report… I promise I’ve already talked to many women who’ve had weight loss surgery, as well as people who’ve benefited tremendously from eliminating a food group for health reasons. Am now covering some important diversity bases.)

Please feel free to forward this newsletter to anyone you know who might fit the bill — or who might just enjoy subscribing.

*Caveat: I’m talking specifically here about weight loss through dieting or other lifestyle changes. But the more scientists understand about why dieting doesn’t work, the closer they’re getting to designing a weight loss method that does. Right now, the best we’ve got is bariatric surgery, which does have a much higher and more permanent success rate, though the majority of patients remain obese and the side effects are really no joke. Stay tuned for a lot more on that world in the book.

Want to get these blog posts directly in your inbox? Sign up for my weekly(ish) newsletter, and you’ll get to read this and other cool things, before anyone else on the Internet.