[The Freelance Life] On Getting Paid (And Knowing Your Worth)

[The Freelance Life] On Getting Paid (And Knowing Your Worth) 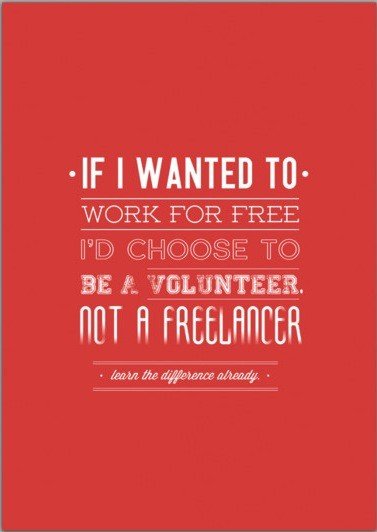 When you’re starting out as a freelance writer (or really, in any creative/media-driven career), this really annoying thing happens: People ask you to work for free. A lot.

I don’t know too many lawyers or investment bankers or insert-almost-any-other-profession-here who have to work gratis or for “stipends” (read: slave wages and maybe some swag from the beauty closet) for years before they get a regular paycheck, but in our industry, it’s a rite of passage. I’m one of the “lucky” ones because I got most of my unpaid labor done in college via three unpaid magazine internships. I made fantastic connections at these “jobs,” and one of them turned into a full-time job after college, so lots of people would say, you see? Luck. But what really makes me lucky is that I come from a family who supported my career goals and were financially able to subsidize the huge corporations benefiting from my pro bono photocopying all those semesters by covering my living expenses through college and for a wee bit afterwards. #thanksagainparentalunits!

The vast majority of young Americans who might want to pursue editorial careers don’t have those resources, which is why our industry a little bit sucks. There has been some movement on this front, thanks to some 3,000 interns who were way gutsier than I ever was and got a class-action lawsuit together last year. I’d love to see this lead to a sea change and entry-level wages for interns across the board — but judging from how the corporate lawyers are handling this one, I think we’re a long way off from making that happen. (Now most publishing companies say that interns are required to receive documented school credit for their work. BTW, they actually always said that, it just wasn’t super enforced. So again, parents pay in the form of tuition for their kids to have these jobs.)

Plus the problem doesn’t end with unpaid internships. Freelance writing has always been, to some extent, cheap and undervalued labor. Magazines often spend far more on the lunch spread at your average photo shoot than they do on the article that accompanies the pretty pictures (or the week’s salary of the editorial assistant who ran around organizing the whole thing). And yes, we can put a lot of the blame on the skewed priorities of publishers. The Internet has also made this whole problem vastly worse because the average website pays in even tinier peanuts than print publications ever have — or expects you to write for free. (Thanks ever so much for starting that trend, Huffington Post.)

Plenty of others have talked about why this trend devalues content and makes it harder than ever to earn a living as a writer. And big picture, yes, I’m right there with you, one with the working man (or 20-something Girls extra, as the case may be). But because I actually have managed to earn a real grown-up salary from freelance writing for the best part of a decade,* I also want to talk about how you as the freelance writer can take some control in this crazy, uncontrollable industry and get paid for your work. As easy (and right!) as it is to blame the big corporations, you also need to know your rights and your worth. And take responsibility for your income so you can make it rain for your own self.

Here are my thoughts on how this happens:

1. Write the business plan. Set the income goals. Hold yourself accountable to your monthly accrual goals. You already know this part.

2. Realize that the word rate is a sham. Stop getting hung up on whether it’s $2 per word (glossy magazines) or 50 cents per word (newspapers) or $4 per word (Carrie Bradshaw at Vogue and probably nobody else, ever). Because guess what? You aren’t getting paid by the word. Let’s do the math.

Your editor assigns you a 1500 word story at $2 per word. Hooray, you think, that’s $3000! Then you turn your first draft in at 1892 words because you had a couple of really good lines that you just couldn’t cut. (Of course you couldn’t. You’re the writer. And frankly, I’ve never understood how you can be a good writer and not write long on your first draft. You need some meat to work with to find the good stuff.)

So now that’s 292 words that you didn’t get paid to write.

Then your editor asks for a revise that involves you deleting and rewriting oh, 978 words. Now that’s 1270 words that you didn’t write. As in, almost double the length of the original assignment.

And if the story ends up running at 1545 words? Nobody is going to add $90 to your paycheck.** In fact, if the story runs at 1412 words because the art director insisted her photos run so big, some places will take the 88 words ($176) off your paycheck. (Not many are this cruel but it has happened to me.)

3. So instead, get paid for your time. To do that, you have to take that word rate fee ($3000) and divide it by the amount of time you spent on the assignment. Maybe it took you two days to report, two days to outline and write, and another two days all told in revisions, answering fact-checker questions and so on. Well that’s 6 days of work — and at $3000, you just made $500 per day. That is not too shabby. Keep that up and you’re looking at real cash money.

I cannot overstate this: Knowing how much your time is worth is everything. This is how you can tell if an assignment is worth taking on in the first place: Maybe that $3000 sounds great but you know the magazine will need so many revisions, you’ll end up with a day rate of $150. That would mean you lose money on the job because you spent all that time doing their work when you could be doing someone else’s. Or maybe it’s a website assignment that only pays $100 — but you knock it off in an hour. That was a nice hour. We should all have more hours like that.

Knowing what your time is worth also means that you can give clear estimates when editors ask you for a project fee (this often happens with bigger projects like writing somebody’s book proposal or editing work). Plus some jobs actually want to pay you by the day or the hour, so now you know what to charge for that. And you can negotiate when the first fee an editor names is way below your asking price.

4. Know when it is worth it to do a little work for free. Look this business is what it is right now, and right now, working for free happens. I hate it, but there it is. I do not encourage new writers to write endlessly for free for anyone, but there are a few circumstances where I think it’s worth doing:

5. Don’t write for content mills. Okay, I know that lots of writers who don’t have mainstream publishing connections do a ton of work for places like HubPages, Associated Content, and all of those others sites that pay literally pennies for assignments (or nothing but you have the potential to earn money via ad clicks or other revenue sharing models). I understand why these places are appealing: They’ll hire you, they talk a good game about how much earning potential you have, and there isn’t much of an editing process so it’s not like you waste time doing thousands of revises. You also get plugged in to a community of writers and considering what a lonely job this can be, that is nice.

But please. Don’t write for these places if you can possibly avoid it. They are shamelessly exploiting you. Your content mill clips are not going to get the attention of editors at bigger publications. You aren’t learning how to be a better writer, just a faster one. And websites like these are a huge reason why content has become so devalued — which means writers and readers everywhere suffer. They are the MLM scams of the publishing world. You are worth more. Hold out for something better.

I am not the only creative professional having useful thoughts on this subject. If you want to read more on how to get paid for your work, check out this post by Emily Henderson (she’s an interior designer but there’s a lot that translates). I also really like this essay “To A Young Writer” by Wallace Stegner in The Atlantic, although you might just find it depressing (he is speaking largely to fiction writers and boy is that the very toughest of all the writing roads you could hoe).

Oh and Who Pays Writers? can be a useful source of information about what places are actually paying.

Questions? Comments? I’d love to hear what strategies you use to get paid what you’re worth — and if you’ve found other helpful resources, please share!

*And I know many other writers doing the same, so no, I am not some crazy fluke.

**Actually, as one lovely editor just reminded me… this does happen at some (very lovely) places. And whenever I’ve had a story run significantly longer than the originally assigned word count, I’ve found editors to be pretty open to increasing the fee. But they usually have to go to bat for you with their boss. And they rarely get permission to increase the fee at the same word rate — it’s usually more like “here’s a little more to reflect your extra work here.” So again, think in terms of days or hours invested and fight for that.