No, Editors Won’t Steal Your Ideas

No, Editors Won’t Steal Your Ideas 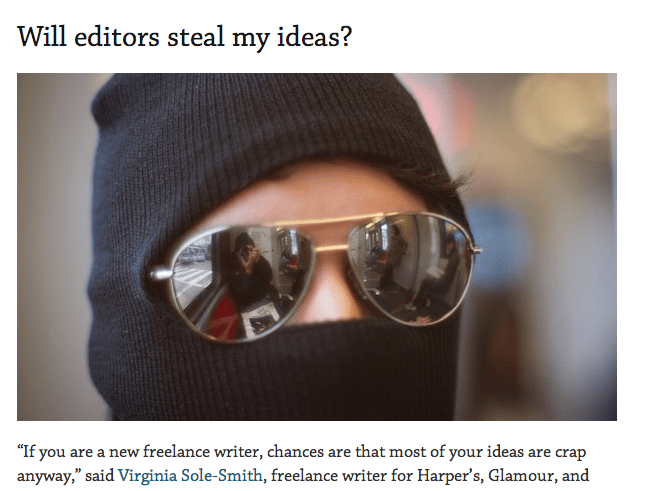 I did a fun interview last month with Grace Bello, who is a journalist, copy writer and writing teacher who writes for the Freelance Strategist. The (very smart!) piece is now up over here. If you don’t know about Freelance Strategist (I, um, did not) — it’s a cool blog run by Contently, which is a free portfolio site for journalists to showcase their work and connect with editors and what have you. I haven’t used Contently myself yet, but a prospective client was just telling me last week how he finds it pretty useful for finding new writers. So I should probably get on that. There is, as they say, buzz, and maybe you should check it out (and tell me how it works for you!).

Anyway, Freelance Strategist has all sorts of interesting articles and I’m on a deadline today so I can’t fall down that rabbit hole any further but you should check that out too, especially Grace’s stuff.

Also, as it happens, we did the interview via email because I was traveling on assignment for what felt like forever in April and Grace was nice and accommodating like that. So since, of course, only a few snippets of what I said in the interview made it into the piece, I thought it might be fun to post the rest of the exchange here for your perusal. Warning: I did this while operating on not enough sleep, too much airport food and second trimester pregnancy hormones.* In short, there is rambling.