Does the Vogue Mom Give Away Our Childhood Obesity Fears — Or Our Beauty Obsessions?

Home Press Does the Vogue Mom Give Away Our Childhood Obesity Fears — Or Our Beauty Obsessions?

Does the Vogue Mom Give Away Our Childhood Obesity Fears — Or Our Beauty Obsessions? 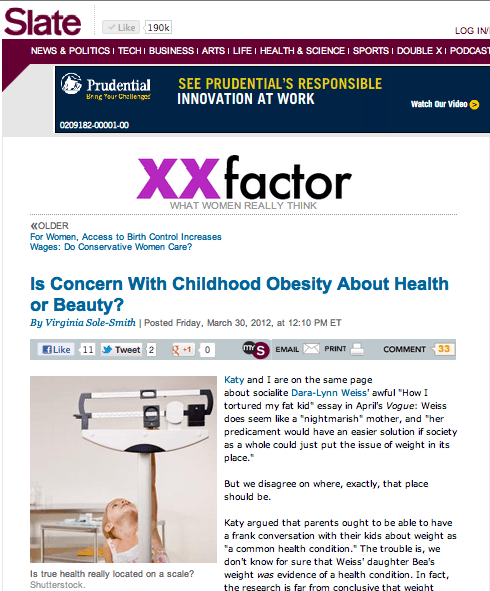 I admit, when this whole Vogue Mom story broke, I had to take some serious deep breaths. (In case you’ve been under a rock all week: Socialite Dara-Lynn Weiss wrote an essay in the April Vogue — the “shape” issue, ha! — about her obsessive efforts to get her seven-year-old to lose 16 pounds.) And when Ms. Weiss then announced that her fun anecdotes about screaming in Starbucks and forbiding her daughter to eat cupcakes (before sneaking two herself) resulted in a book deal… I had to take a lot of deep breaths. Because that is a thing. That is happening. Yeah.

Anyway. I’m calmer now. And I’m also over on Slate’s XXfactor blog again, making some of my favorite points about this whole mess (not the book deal part, that’s just gross): We’ve got health and beauty all tangled up in a big ball of confusion. The Vogue Mom is batsh*t, yes, but while we’re finger-wagging, let’s also look at our own complicity in this mess. And you can’t tell much about a person by their size — other than their size.

It’s generating all SORTS of feelings in the comments. So go check it out, weigh in there or come back and we’ll talk about it here.

But bottom line: Have we learned nothing from those Georgia billboards (the counter-campaign is UP, btw!) and my awesome cousin Kate? Fat-shaming isn’t good for anybody’s health. Especially not when you’re seven.