Brazilian Blowout Settles — So Why Are Stylists Still Getting Sick?

Home Government Watch Brazilian Blowout Settles — So Why Are Stylists Still Getting Sick?

Brazilian Blowout Settles — So Why Are Stylists Still Getting Sick? 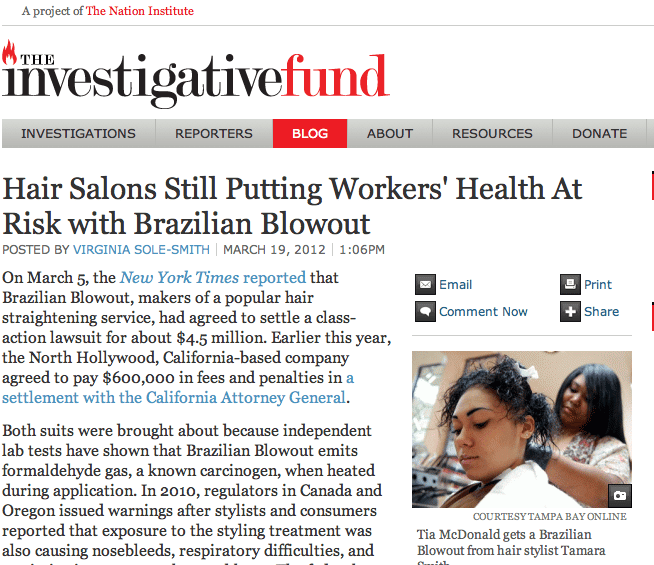 Today I’m over on The Nation Institute‘s Investigative Fund Blog, with a piece about the latest Brazilian Blowout court settlement.

You guys, I am seriously SO OVER this story. By which I mean: I am so over the fact that there is still a story to tell here.

First of all, we’ve known — anecdotally, at least — that keratin hair straightening treatments contain toxic chemicals ever since Siobhan and Alexandra were inspired to write No More Dirty Looks because of their $400 hair disaster.

And we’ve known that formaldehyde is officially a carcinogen ever since the National Toxicology Program added it to the official list of substances known to cause cancer in June 2011. (Also, hi, it was formaldehyde. This decision did not rock the toxicology world to its core.)

And we’ve made progress: The California Attorney General won their lawsuit and now another class-action lawsuit has been settled, costing the company upwards of $4.5 million. They have to stop saying their product is formaldehyde-free (’cause it ain’t) and they have to affix “caution” labels to the bottles in California, at least.

But: I am still writing about this story. Because they are still allowed to sell Brazilian Blowout, with all of its formaldehyde. They do not have to change the formula. They do not have to ensure that salons use proper ventilation. Salon employees and booth-renting stylists (who have even fewer rights as workers) are still being intimidated and bullied into performing this service and putting their health at risk.

All so ill-informed customers can have shiny, silky straight hair.

This is because nobody — not FDA, not OSHA, not the EPA, not anybody else you can name — has the authority to issue a mandatory recall of the product and get it off salon shelves.

When I interviewed hair stylist Jennifer Arce (who is speaking out against Brazilian Blowout) for this piece, she told me that she’s getting multiple calls and texts per week from stylists around the country who are getting sick at work and don’t know what to do about it. One had her job threatened when she posted a notice about the risks of Brazilian Blowout in her salon’s break room. Others have had to quit jobs and some worry they’ll have to quit the industry without a clear exit strategy. And most don’t have health insurance to help pay for doctor’s visits or inhalers when Brazilian Blowout starts making them sick.

If you have a story to share about how Brazilian Blowout has made you sick (whether you’re a beauty industry worker or a salon customer) or if you just want to see this product banned, you can send it to the National Healthy Nail and Beauty Salon Alliance.

It’s time to get this done.