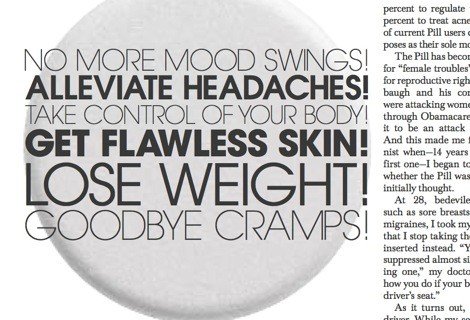 This is one of those very tricky stories that made me think very hard about stuff that I’ve long taken as gospel. Specifically: That The Pill is the best thing that ever happened to women’s healthcare and maybe to women, period.

I know. As a good feminist and generally responsible human being, I have long assumed that being on the Pill was more or less my civic duty. I thought I had to be on it the same way I have to vote because, you know, Susan B. Anthony and Seneca Falls.

But you guys already know a lot of my back story here: Migraines, endometriosis, what have you.* And at some point along my merry way, I started wondering about the Pill. It was clear that all of my health issues were hormonal. And the Pill — which I had been taking faithfully since the age of 14 — is nothing but (synthetic) hormones. I tried lots of different kinds and ultimately got to this catch-22 situation where I couldn’t stay healthy off the Pill but I also couldn’t find one that worked for one problem without making the other one worse. In talking casually with girlfriends and many readers of this blog, I realized that lots of women struggle to find a good fit with the Pill… yet we also all take it for granted that it’s The Best Thing Ever For Women’s Health. Because choice and responsibility and empowerment, right?

The thing about choice, though, is that it means we have to keep on choosing. And asking questions. And we can’t let giant pharmaceutical companies co-opt that feminist rhetoric because it’s great for their bottom line. So enter Wonder Drug (PDF, also online) where I investigate how the Pill has become not only our top choice for birth control but also the supposed cure-all for every women’s health ailment, from acne and weight gain to endometriosis and polycystic ovarian syndrome — even though the research on its longterm health impact is not nearly as clear cut as we’d like.

This is one where there really is no easy answer. The Pill may be simultaneously The Best Thing To Ever Happen to Women… and really bad for a lot of women. You’ll have to make up your own mind. I’m still making up mine. I think science is still making up its mind. So give it a read — I’d love to hear what you think!

*Spoiler alert: Pregnancy and breastfeeding seems to have put both of my issues into major remission. As in no cysts, no migraines, no pain for months and months now. Now let’s not speak of it again lest we risk jinxing things!