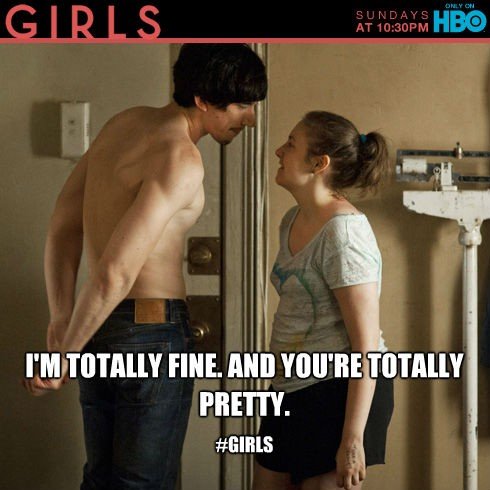 I’m a little late to this game since the first season of HBO’s GIRLS ended Sunday night. But if, like me, you don’t schedule your life around appointment television, then you’re probably very appreciative of the fact that I waited a respectful three days before blogging about this so as to avoid spoilers. You’re welcome.

At any rate: It is high time that I expressed my fervent appreciation and admiration for Lena Dunham and the amazingness she has created with this here show. The poor girl experienced all manner of backlash when it first premiered — how could she not? She’s approximately twelve and she’s been put in charge of a prime time comedy at HBO. She’s writing, directing and starring in a show about being a New York-based twenty-something all the while actually being a New York-based twenty-something. Most of whom are generally lacking in the perspective you would need to do such a thing. So everybody had to get up in arms about whether she was accurately capturing the experience of being poor and pretentious during your twenties. Are their jobs appropriate? Do they dress too fashion-y? Why aren’t there more black characters? Who eats cupcakes in the bathtub? Is Bushwick just too… Bushwick-y? And so on.

Frankly, I stopped paying attention to those complaints because I was convinced by the second episode that Lena Dunham somehow — albeit freakishly — has all the required perspective and is capturing the poor-and-pretentious-in-your-twenties thing beautifully. Also, I think it’s a bit mad to expect a frigging television show to encompass the entire experience of a generation. How/why would that be the goal? GIRLS is strange and funny and at least once per episode, so painfully real, sad or sweet, that I can’t look directly at it.

But enough of that debate. Here’s what Lena Dunham is doing that is so truly subversive and smart that I can’t even believe they let her get it away with it on television: She’s playing the female lead in a sitcom without a perfect Hollywood body — and her lack of six-pack abs is not the entire point of the show.

This is really happening! It’s no Mike & Molly travesty. (And y’all know my girl crush on Melissa McCarthy — I just hate that her whole show has to revolve around the theme of “Fat people can fall in love too!”) It’s not the typical sitcom set-up where schlubby dude somehow scores the hot, thin wife. (In fact, it’s sort of the opposite, but not really.) Also, Lena Dunham isn’t enormous — she’s in that gray area of imperfect women’s bodies that usually, Hollywood has no idea how to handle. You can’t make her a pin-up but you also can’t make her a plus-size model or obesity cautionary tale. She’s just herself.

As always: I’m celebrating Lena Dunham’s body for its own self. Not at the expense of women who do fit the Hollywood thin standard (Julie Bowen does not need to eat a sandwich) or for that matter, anyone who is bigger than she is. My point is that normally, the only bodies that get portrayed in the media fit into one extreme or the other — the revolution here is that we’re seeing someone who defies that categorization.

And we’re seeing her naked. A lot.

I can think of no other show where this has happened. (Can you guys? Maybe My So-Called Life? Claire Daines sure fits every beauty standard now, but Angela Chase was a lot more awkward in her baggy overalls. But that got cancelled after one season, but GIRLS is still going strong.) We’re presented with Lena Dunham’s body, almost entirely without explanation or apology, and then we move on to this smart, funny show that’s about so much more than what her character, Hannah Horvath, looks like.

Of course, it’s not like Hannah’s body never comes up. She self-deprecates about it here and there, like when she describes her roommate Marnie as a “Victoria’s Secret Angel” and herself as a “fat baby angel.” But it’s never the major plot line; we hear her obsess about a lot of stuff and dieting is almost never mentioned.

And then [spoiler here] I had one of those can’t-look-directly-at-her moments when she yelled, “I am thirteen pounds overweight and it has been horrible for me my whole life!” at her boyfriend, Adam, during their season finale fight.

It was funny because it was so true. Of course Hannah hates her body in this matter-of-fact way that we’re all told we should hate our imperfect bodies, always. It’s been the background noise all season — and all of her life — behind all of her other, bigger fears: That she’s not really a good writer, that Adam doesn’t really want to be with her, that her friends are growing up and leaving her behind. And at the same time, being this scared is a totally irrational and useless form of self-hatred, as Adam points out. That smidge of extra weight doesn’t qualify Hannah to know any sort of true suffering or deeper truths about humanity. It doesn’t even enlighten her about what it’s like to experience size discrimination except from her own self — because, as Ragen wrote earlier this week, feeling fat and being fat are very different experiences.

But in being irrational, Hannah’s body hatred is perhaps all the more universal — because there’s nothing very rational about hating your body or comparing it ruthlessly to others, no matter where you fall on the whole beauty standard spectrum. It doesn’t teach you anything profound or make you a better person. And despite our culture’s determination to fat shame our way out of the obesity epidemic, it’s rarely good for your health.

Lena Dunham — freaky-brilliant child prodigy that she is — has decided to simultaneously show us the kind of imperfect woman’s body that we almost never see portrayed in the media and the kind of dysfunctional body image that our culture has so completely normalized — but doesn’t want to own. “…instead of telling a story about how Hannah learns she is worthy of love, or any of the other pre-approved storylines for women with non-Hollywood bodies, GIRLS isn’t really content to stay within that expected set of narratives,” Alyssa Rosenberg observed last month on Think Progress and I quite agree. Because it’s offensive to presume that non-conventionally-beautiful women spend all of their time obsessing over their bodies and trying to lose weight (a la the usual Fat Character stereotyping and the ugly ducklings-becoming-swans plot lines of many a teen makeover rom-com). And that’s why Hannah’s story is about so much more than her body.

But it’s also dishonest to ignore the true and complicated impact of our beauty culture. And so Lena Dunham doesn’t.

[Image via the HBO GIRLS Facebook app, which lets you create your own #Girls image to share — but then they make you choose from a disappointingly short list of captions, which is why I had to use this quote instead of “fat baby angel” or “13 pounds overweight,” etc.]