The New Toddlers in Tiaras

The New Toddlers in Tiaras

This is my three-year-old niece, Lorelai. 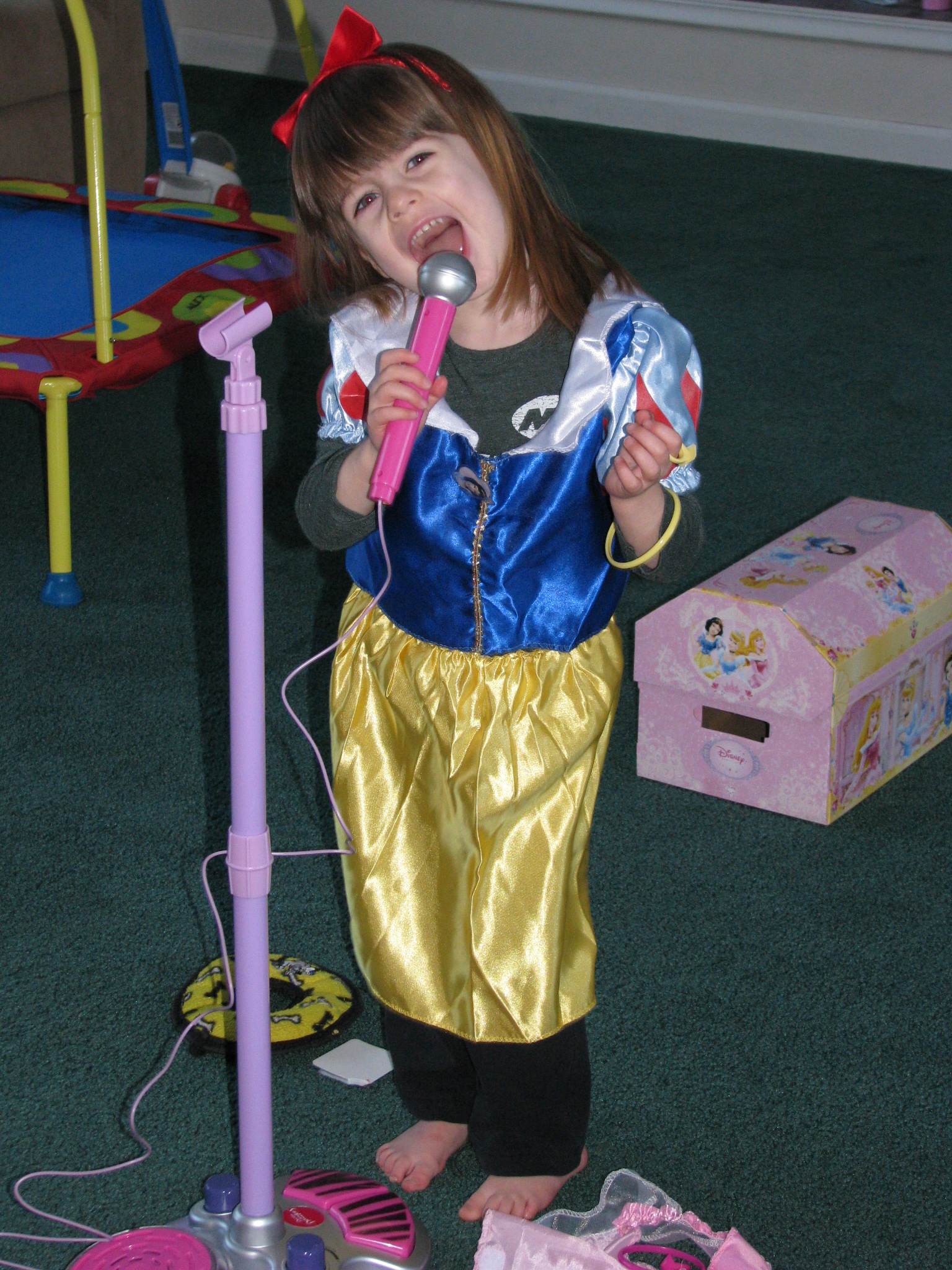 Obviously, she’s just about the most adorable kid you’ve ever laid eyes on. We’ll just all spend a moment thinking about that before I get to the point.

Lorelai is also — in case you hadn’t already guessed where this is going — super into princesses. She got a box of princess dress-up clothes for Christmas, and has been wearing this Snow White costume most every day since.

I mostly think this is awesome. Her parents haven’t shown her the movie yet, so she hasn’t absorbed the disturbing themes about female rivalry, needing a prince to save you, and finding personal fulfillment in cleaning house for seven lazy-ass grown men. Lorelai thinks that being a princess means running around in a fun dress and serenading her dog Jackson with this pink plastic microphone. Between the sweat pants and the hair bow, I think she looks like she’s ready to front a riot grrl band with a quasi-ironic name like Cracked Rhinestone or Rusty Tiara.

But I also just finished reading Cinderella Ate My Daughter: Dispatches from the Front Lines of the New Girlie-Girl Culture by Peggy Orenstein, one of my favorite writers. She charts how Disney Princesses serve as a kind of gateway drug, inducting little girls into the world of Everything Pink and Pretty, which then sets them up to love Barbie, Bratz dolls, makeup for eight year olds, and every other plasticized, pretty-fied artifact of modern girl culture. The relentless marketing of this stuff teaches girls that sexuality is a kind of performance art in which you objectify yourself to please others. And this connects your sense of self-worth to how you look instead of how you feel.

Orenstein’s evidence is pretty darn convincing. So before you get all “but every girl loves pink!” on me, consider this: Princess culture today is not the princess culture we grew up with. Disney Princesses didn’t exist as a marketing concept until 2000, when a marketing executive stopped by a “Disney on Ice” show, saw thousands of little girls wearing homemade princess costumes and realized hi, massive branding opportunity.

By 2009, sales of Disney Princess costumes, lunchboxes, pillowcases, you name it, had topped $4 billion. And a few weeks ago, the New York Times reported that Disney is now targeting newborns by distributing free Disney onesies in hospitals, in an effort to ensure that every American child becomes a customer for life. You start out on something relatively gender neutral, like Winnie the Pooh, then move on to innocent, pink princesses, until you graduate to innocent-sexy princesses like Miley Cyrus and Selena Gomez.

Seen in that light, Lorelai’s combination of the pink microphone and the Snow White costume is a little more alarming in a “fairytale princess today, pop princess tomorrow, rehab by age 20” kind of way. And Lorelai’s mom Becca (my sister-in-law) says she’s conflicted about the new princess onslaught: “I want my kid to be involved in creative play and use her imagination and here an opportunity has presented itself,” she says. “I get the sparkle, I get the dress-up, I love fairy tales. But I don’t love that they involve ridiculous gender stereotypes or that she can identify every princess on her Pull-Ups before she’s even seen any of the movies.”

The homemade princess costumes that Becca and I wore as kids (well more me; Becca wasn’t much of a girlie-girl, though she does admit to a major Daisy Duke phase) were less about embodying a brand and much more about exploring our own creativity. (Side note: They also lasted longer. “On top of being everywhere, most of this princess stuff is cheaply made,” says Becca. “Snow White is starting to shred. I am going to have to make a trip to the craft store for back-up dress supplies.”)

But the new princess products encourage us to buy imagination for our kids, mass-produced and no assembly required. Writes Orenstein:

It chilled me to read, in the market research group NPD’s report on this trend, a quote from a nine-year-old Barbie.com fan who said, “I don’t think I’m good at making up imaginary things; I didn’t know what to do with dolls.” […] even more than the original toys, these sites funnel our daughters toward very specific definitions of both girlhood and play.

And this makes all those messages about how girls are supposed to look (that young/thin/sexy triumvirate) and how they’re supposed to behave (sexy-yet-so-innocent) all the more powerful. In Chapter 8 “It’s All About the Cape,” Orenstein explores how princess culture gives way to body image issues — and not just because it offers such a narrow definition of what girls should look like. The Princess Wars also set up a disturbing dichotomy where your only options are to embrace the princess or reject the princess — and all of the girls who like princesses along with it.

Because this is the very same dichotomy — the kind of Beauty Gap — that I talk about round these parts all the time. It’s what happens when women decide that anyone who gets breast implants is stupid. Or how I kept my pre-wedding weight anxiety a secret because I didn’t want to come off as one of those vapid Buff Bride types.

It seems to me that maybe the most dangerous price of modern princess culture isn’t that it teaches little girls that they have to look and act a certain way — though that’s certainly troubling. The  most dangerous part is that it pits girls and women against one another, so we waste time hating on each other (and on ourselves) when we could be getting sh*t done. You can’t fight oppressive beauty standards with… oppressive-just-different beauty standards.

So I think Becca is completely right to let Lorelai run around in her Snow White costume. That pink microphone offers a way for Lorelai to (unconsciously, she is just three!) reinterpret the fairy tales on her own terms — giving Snow White a voice and a platform she never had when she was busy whistling while she worked or falling into a poison apple coma. “We support her interests, but we also offer her other opportunities, so she spends a lot of time running around outside, drawing, making things with Playdoh — and none of that is remotely princess-related,” Becca explains. “Sure, she’s a toddler in a tiara, but there’s a lot more to her personality than that.”

Thoughts? Do you think the newly amped-up girlie-girl culture is backing us into a corner? And if so, how do we get out?