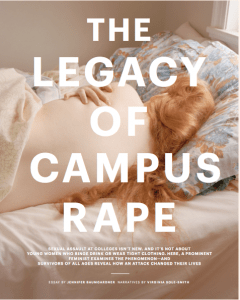 Now back to our regularly scheduled programming (aka, the things you’d expect me to write about): Campus rape!

I’ve been following the current campaign to address this issue for quite awhile now. Emma Sulkowicz, Ariel Koren and the other women leading the fight on this are doing such brave, important work. They’re dealing with the immediate aftermath: What to do about frat parties, and less-than-proactive university administrators and all of the other factors that contribute to rape culture on our college campuses, right now. But I’ve also wondered: What about the (far too many) women who were raped in college a decade ago? Or four decades ago? What are the ripple effects of this experience on their adult lives, especially since these attacks happened long before colleges were prepared to protect and empower victims?

To understand those questions, I interviewed five women who were raped during their college years… and survived. Some of them became activists. Some of them became mothers of sons, who they raised differently because of what happened. Some of them became mothers of daughters, who they struggle still to empower and protect. They all carry scars from their experience. They all have wisdom to share with young women today, on what we can do and how to make it better. My profiles accompany a powerful essay by Jennifer Baumgardner, feminist, author, and director of the 2013 documentary It Was Rape.

The story is in the February issue of MORE Magazine, which is on newsstands now or in my portfolio here (PDF). I’ve been promoting it on social media over the past week, so you’ll get to meet the women involved in forthcoming blog posts. In the meantime: If you or someone you know has been raped, you should know that it is never too late to report it. Yes, even decades later. The average rapist attacks 12 to 17 women before going to prison; even if the statute of limitations has expired on your case, your testimony could help police convict on later charges. And you may still be able to sue for damages in civil court. Perhaps most importantly, speaking out can provide a sense of closure. To learn about your options, contact Take Back The Night for free legal advice; you’ll get a response back within 24 hours.