[The Freelance Life] Can You Quit Your Day Job?

[The Freelance Life] Can You Quit Your Day Job? 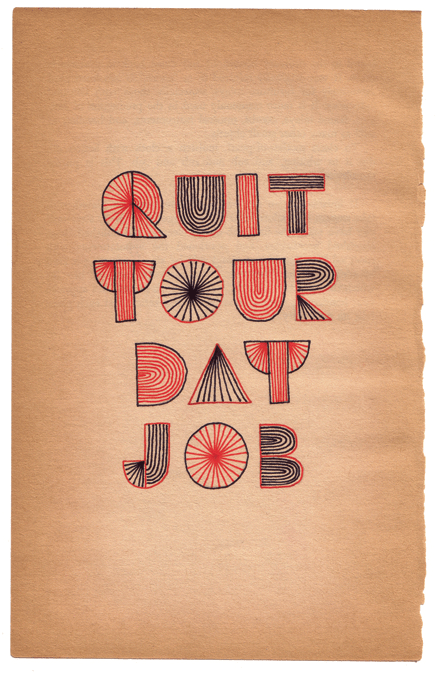 I get this question so often. People are miserable with cubicle life, itching for a more flexible schedule and ability to be outdoors in the daylight hours, and they want to up and drop everything and hang out the freelance shingle.

So let me cut right to the chase and give you the short but sad answer: Probably not.

At least, not right now.

This is because pretty much nobody should quit their day job in the current economy without having already lined up their next job. Not if they are responsible for say, rent, or feeding themselves and perhaps other people. It’s too damn dicey out there.

But this is not to say you can’t start lining up your next job — and that would be your life as a freelancer. Just like how you would start interviewing and networking and all that jazz if you wanted to be hired by a different company, there are concrete things you can do to get ready to quit your job and become a full-time freelance writer. Let’s take a look.

You want to trade life on a biweekly paycheck (however so humble) for life where it takes, on average, three to four months for a paycheck to arrive after an editor has said “please write this story.” And since that’s the average, I can promise you that there are many more paychecks that take much longer to arrive. My worst client’s record was over four years. (Don’t be too scared, that one has a pretty random back story.) So you have to think like any new business and figure out where your start-up capital is coming from because you are going to need money to pay the aforementioned rent and bills before those paychecks start coming in. I’d shoot for at least three months’ worth of living expenses, but if you can swing more, that’s even better. You most likely will not land an assignment that pays a month’s worth of bills on Day 1 of your new job, after all.

If three months sounds like it would take years to save up, there are some other options: Trim your current budget down to nano-sized so you can live on less while you get this thing off the ground. Borrow money from some rich uncle (so fraught). Or finagle getting laid off with a great severance package. I’ve already fessed up to the fact that getting fired launched my freelance career, so yes, this really does work – though obviously, it’s far from ideal and there are a lot of details out of your hands. Plan A probably is the best bet for most people — it’s the one I was working on when we got the axe.

We’ll talk more about what pitching is and how to do it well in future posts, but assuming you have a basic understanding of the art, get your arse in the game. As a completely unscientific rule of thumb (based largely on anecdotal experiences), I’d say you need to be pitching two to four articles a month while you’re still at your day job and saving your start-up fund. Start with four (so, one a week) and then once you land a few assignments, you can ease back to two (because you’re going to need time to write those stories, after all).

That might not sound like very much, but A) pitching well is more time consuming than a lot of people think, especially when you’re starting out. B) It’s really, really exhausting to be trying to launch a whole new career when you’re working full-time at another job and I believe in setting realistic goals to avoid burn-out. C) You will have so much more time for pitching and writing once you actually are a freelance writer. It’s more important now to focus on building relationships (see below) and getting your ducks in a row, financially. Then when you officially dive in, you’ll have a built-in client base and solid list of prospects ready and waiting to hear from you.

You can turn “one or two freelance articles as a side gig” into a full-time career with smart financial planning and strong connections. You cannot turn “I send pitches out every night until midnight but they all get rejected all the time” into much of anything because you will be too burned out and exhausted to get anything done. But you also can’t turn “I have never written a pitch letter” into a full-time job so do buckle down and get those two to four pitches done.

Oh and in terms of where to pitch: That’s also a topic for a future post, but briefly, I suggest making a big list of everyone you’d love to write for (it should be really big, like more than 25 places). Then split it into categories like “Places Where I Have Contacts,” “Places Where I Know Nobody Except In My Dreams,” and “Places That Pay Crap (Or Nothing) But Are Easy To Land Clips.” Pitch a mix of these places every month, erring more on the side of the “This Could Actually Happen” categories. I’m all for throwing the occasional dream dart, but no, the New Yorker is probably not going to publish your short story when you have written for only your college lit mag.

So cheesy and awkward and What Color Is Your Parachute-ish, I know. And most writers are not natural networkers. In fact, many writers (God love you!) are entirely lacking in social skills. (For proof, see Lena Dunham’s Twitter feed.) I’m afraid my advice boils down to this: Get over yourself.

The publishing industry basically only exists on the kindness of some original master editor who was nice to a young whippersnapper of a writer way back in the day a hundred years ago or whatever. Then that writer was nice to some more wanna-be writers and editors, who grew up to be nice to other writers and editors and eventually some of those people were nice to me and now I’m being nice to you. This is how we make the sausage.

So go to events (I met my good friend and fellow freelance writer Melissa at something called a Speed Networking Event back in 2003, I kid you not! She is literally the only person I remember from that event… but we’ve traded job leads and advice ever since, plus she’s delightful, so she was well worth the price of admissions, also known as two vodka cranberries). Don’t be weird. Send notes to editors and writers when you love stories they worked on. Online is a good place to start, especially if you aren’t New York-based. Comment on blogs, tweet people, and again, don’t be weird.

The biggest turn-off with networking is when it’s blatantly obvious that somebody is only reaching out to you because they need something, and don’t actually give a shit about you or your work. Those are the emails that get deleted. (Like the one that started “I loved your Mary Kay story in Harper’s Bazaar. Can you tell me how to get them to publish my work?” Yes, step one is getting their magazine name right. But now I’m being mean.)

Bottom line: Being genuinely friendly and informed about their work goes a long way. You just have to think in terms of the long game. This isn’t about immediate transactions (boom! A big assignment!) — it’s about making acquaintances that lead to friendships (or at least colleague-ships) that lead to them remembering you when the right assignment comes up maybe, down the line.

There is one other major thing you need to do before you can quit your job for the freelance life — but it’s pretty complicated so you’ll have to sit tight while I get around to writing that. Don’t worry, I’ve given you plenty to keep you busy in the meantime.

Folks who made the switch to freelancing: What am I forgetting?

And other people: Are you thinking about becoming a freelance writer? What roadblocks do you see getting in your way?