The 10 Year Challenge: What’s Not Pictured

The 10 Year Challenge: What’s Not Pictured

The Facebook 10 Year Challenge appeared sometime last week, without any formal announcement or reason, as these things do. Our social media feeds simply began accumulating pairs of profile pictures, one at least ten years old, one brand new, accompanied by wry, self-deprecating captions. My informal survey reveals that these captions fall into one of three camps: Look how weird my hair was in 2008; look how little I appear to have aged (thanks to significant improvements in iPhone cameras and filter technology). And, most popular by far: Look how thin I used to be. What happened to my waist? 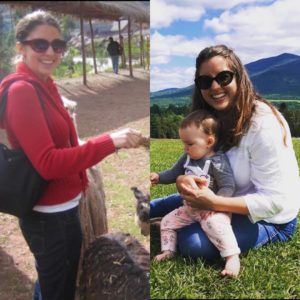 Here is 2007 me, feeding a baby llama on vacation in Peru.

Here is 2018 me, holding my own human baby, on vacation in Vermont.

In both pictures, I’m wearing jeans, excellent sunglasses, and hair that hasn’t seen a blow dryer in several days. In the current picture, I also have a far less visible waist and at least 40 extra pounds.

Not pictured, 2007: All the times I woke up at 4am, panicked about my fledgling freelance writing career. The borderline obsessive relationship with running that I pushed through two half marathons (one with food poisoning), a stress fracture, and some really crunchy knees. My constant inner monologue about every meal: Was it enough protein, was it too many carbs, what is the right portion size for this kind of pasta anyway, did I run today and if not, how much am I running tomorrow, to justify it. It was not an eating disorder; not quite. There was plenty to love about 2007 me and there were times, running through Central Park, when I would feel light and free and unencumbered for a few glorious moments that are hard to remember now. But more often, there was the math: How many minutes I had to spend on the treadmill, how many calories in this egg sandwich, how I would see that reflected in the scale.

Not pictured, 2018: The year I learned to swim. The gardens I have grown. All of the delicious pasta I have eaten. The thousands of words that I’ve published; the two glorious humans I’ve made. The 123 days we spent living in a hospital while our first daughter underwent multiple surgeries for a heart condition. People cope with trauma in different ways. My husband started running a lot more. I cocooned myself in her ICU room, decorating the walls with family photos and eating chocolate croissants from the hospital’s Au Bon Pain. These are both good strategies for managing intense stress and terror, but only one will make you thin. Then there was the exhausting pregnancy I had with my second daughter, where I was writing a book and throwing up every single day for 40 weeks, and thus, not making time to exercise. When it was done, I came back to exercise, but so slowly. Those crunchy runner knees didn’t handle the onslaught of pregnancy hormones well.

It’s mostly women who are digging out their 10-year-old photos, and this makes sense. It’s mostly women who tie our self-worth to our appearance; who know, when we run into old friends or colleagues from a decade ago that they are, in fact, noticing how much weight we lost for our weddings, or whether we’ve got our pre-baby bodies back, or if we are now letting ourselves go. Research shows that women experience weight stigma—such as being turned down for a job interview, rejected romantically, or harassed about our size on the street—more often and at lower weights than men. We’ve been conditioned since childhood to think of our bodies as numbers on the scale, as jean sizes lost and gained, as perpetual before and afters.

Back in 2007, when I used to go running in Central Park, I’d stare at the bodies of everyone going faster or slower than me. Sometime I’d see women, usually older, sometimes fatter, not running—just walking. I was jealous of the faster runners, the thinner runners, lapping the reservoir on gazelle legs. But even more, I was jealous of the walkers. I envied that they somehow, had obtained permission to move slowly, to do less, to be satisfied with that. To be kind to themselves. I saw them as free from the need to use cardiovascular exercise as a means to attain thinness. And I daydreamed about an amorphous future time, when I’d be granted that same permission. Maybe when I got pregnant someday (at 26, that felt like saying “maybe when I become an astronaut). Maybe when I turned 35. Or 40. Or maybe when I reached a certain weight or some other arbitrary marker of my value, where being as thin as possible would no longer be the goal.

These days, I walk on the treadmill first thing in the morning, before my daughters wake up. I change the speed, the incline, the workout length, based on how I’m feeling that day. Sometimes it’s 20 minutes. Sometimes it’s 45. Often that depends on whether I’m watching a West Wing rerun or a new episode of The Good Place while I do it. I don’t expect this workout routine to change my body size. I do expect it to improve my mood and my posture, because I can see that happen  immediately. I don’t do it to achieve some new and improved version of myself; I do it to feel good as I am.

Digging up that 2007 picture, I still had a moment of wistfulness; I really did used to have a waist. And I wish I’d appreciated that more at the time, because I might never have one again, and it’s an inconvenient way to shop for jeans. But mostly, we need to stop boiling ourselves down to a photo, to a moment in time that can never tell the whole story of who we are and how we’ve lived. We need to give ourselves permission to let go—because the world will never, ever do it for us. I wish I could tell 2007 me: Go ahead. Slow down right now. It’s even better than you think.

Virginia Sole-Smith writes about feminism, body image and health. “Food has become complicated for too many of us because of our misogynistic diet culture. But we can learn to feed ourselves and our families on our own terms.”

Sign up for my newsletter if you like rants on the diet industry, sometimes more random musings, and answers to your questions about how to parent without passing on your own toxic body image crap. As a thank you, I’ll send you my five strategies (culled from my book research) for protecting your own eating instincts, and improving your relationship with food.

An exploration, both personal and deeply reported, of how we learn to eat in today’s toxic food culture.

The podcast about the joys (and meltdowns!) of feeding our families and ourselves.