Home Government Watch Something I’m Up To: The Economic Hardship Reporting Project 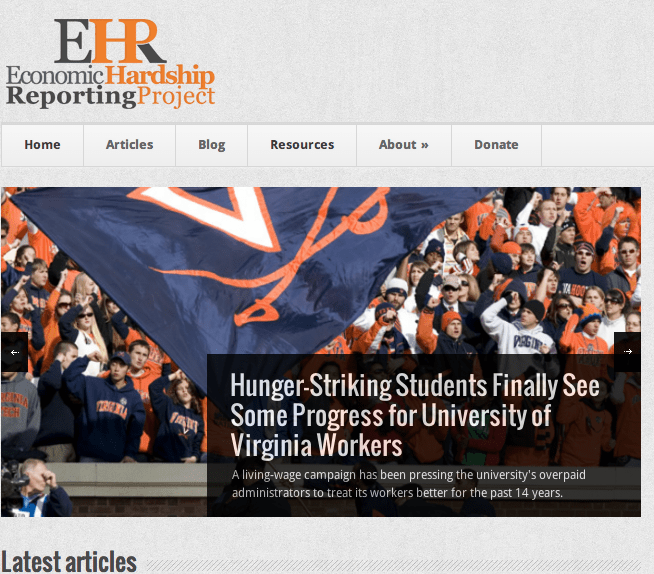 I know, I know. This blog has been a little… quiet… as of late. Does it help to know that I’m thinking about you guys a lot more than I’m actually writing posts? Probably not, and there’s nothing more irritating than those blog posts that are really just “ahhh! soo busy!” excuses, so let’s not even go there. I am tweeting and Facebooking a bunch, and you knowing I’m Pinterest-ing, and hey, I’m even on Instagram now… so at least we’re all keeping up in all of those places.

I’m dropping in now to tell you about one of the things that is keeping me so busy (in an awesome way): The Economic Hardship Reporting Project, which is an exciting new journalism nonprofit founded by best-selling investigative journalist Barbara Ehrenreich and the Institute for Policy Studies. Its mission, per the About page, is this:

to force this country’s crisis of poverty and economic insecurity to  the center of the national  conversation. Unemployed, underemployed, and anxiously employed Americans need to know that they are not alone, that the current economic crisis is not their fault and that they are not always getting the information they need to find solutions.  Just telling compelling stories of individuals and families isn’t enough. We want to link such stories to the large picture, as we explore extreme — and deepening — inequality and the decline of the middle class.

And here’s me, over on the contributor page, with a little hint for you about what I’m working on… 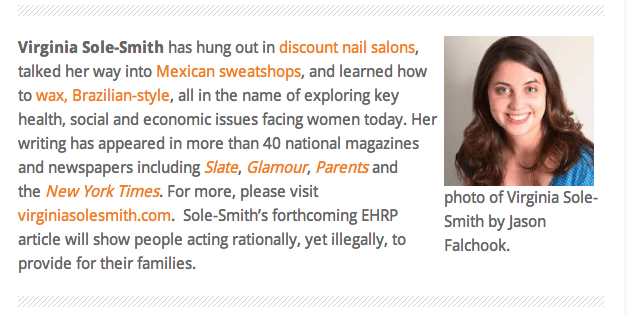 I was invited to contribute primarily because of my work with The Nation Institute’s Investigative Fund — but those of you who know me through my writing about body image might be all “what does this chick who talks about loving your body know about economic hardship?”

Well, I’ll be the first to admit: Not so much. Although EHRP does state that part of its mission is to work with “unemployed or underemployed journalists,” (which is awesome!) I’m not currently in either camp. (Knock wood. This industry is madness.)

But when we talk about beauty myths, body image and size discrimination, we can actually get into conversations that are really about race and socioeconomic class pretty darn fast as I often discovered during the Beauty Schooled project. Then at the beginning of May, I attended the Beyond Hunger Conference, organized by the amazing Witnesses to Hunger and Philadelphia’s Center for Hunger-Free Communities and learned — from women who have been there, or are there, and do know this firsthand — that the war on obesity in this country all too often ends up being a war on poor people.

So those are some broad strokes for now, but trust me: There is overlap. In ways that I’m still learning and thinking about as I’m reporting my first story with EHRP… and because I love dissecting these issues with you guys, I’ll do my best to keep popping in to share what I’m learning/thinking about and ask you what you think.

In the meantime, definitely add the Economic Hardship Reporting Project’s blog to your feeds — Barbara, co-editor Gary Rivlin (author of Broke USA) and the rest of the team are posting some great stuff. And you can also follow them on Twitter, like them on Facebook, donate to support their work, you know the drill.