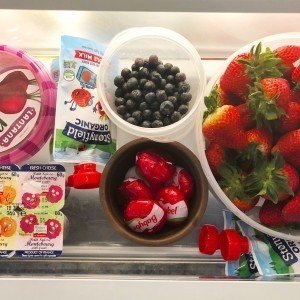 I posted this pic on Instagram a few weeks ago, of my effort to give our 4-year-old choices she would enjoy (rather than whine about) at snack time. The goal here was not to police her sugar intake or anything like that, but rather, to get on top of the endless “I need a snack!”-itis that we sometimes (often) endure. A lot of folks chimed in, because whoa, the snack struggle is real. It’s such a weird invented meal, stemming partly from legit need (kid bellies do need filling every few hours and often more frequently than adults) but partly from our snack-on-demand food culture, that encourages kids to think they need to eat whenever their hands aren’t busy.

So, I thought I’d post a quick update on where things stand with our snack drawer. The berries were joyfully devoured (along with not-pictured goldfish crackers) every afternoon. Everything else was rejected, despite ardent declarations of love for it in the store. I’m looking on the bright side: The baby is eating the yogurts and hummus. And the cheese lasts forever so it could come back into favor (or the baby will eat that too when she learns to chew).

The more useful finding of this experiment was this:We actually don’t need to stress out about having the perfect selection of delicious snack foods on hand at all times. When most kids are hungry and — this is crucial — not feeling pressured about what they eat, they’ll try lots of different things. When they’re whining for snacks, they are usually looking for our attention more than food. Getting caught in that all too common cycle of offering ten different snack options only to have them reject everything gives that attention — but in a way that leaves both parents and kids unsatisfied. So a snack drawer can help put some parameters around the whole thing; it limits the conversation because parents stay in control of what’s being offered (and when!), but kids get to decide which foods and how much they eat. That’s the premise of the famous feeding therapist Ellyn Satter’s Division of Responsibility in Feeding, which I also discuss in much more detail in my book...

Here are a few other good food reads:

And Aaron Carroll, who writes the New York Times‘ Upshot column, draws a tired conclusion from the latest weight loss study: “The best diet is the one you can stick to.” What he’s really saying is that research can’t definitively say whether it matters that you go low-fat or low-carb when you cut calories; people lose a little bit of weight on both diets. I like that this gets us away from ranking foods as good and bad — but that “whatever you can stick with” concept always bugs me because it’s only half the thought. What makes a diet stick-with-able? How long are you supposed to stick with it? And who do you blame if it doesn’t stick? Because if there’s one thing I’ve learned over the past few years of researching this stuff, almost nothing about eating habits is ever forever, especially when it’s something you’re doing because you “should.”