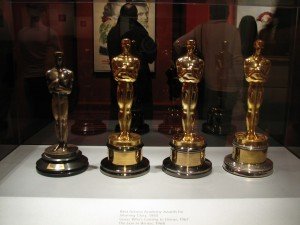 I fully admit to falling asleep after Russell Crowe ruined the Les Mis group singalong, but now that I’ve caught up on the remaining 19 hours of the Oscars last night, there are a few things I think we need to talk about.

1. Enough with the Black Swanning already.

Forget your feelings about her nipple-y dress and overly earnest acceptance speech, Anne Hathaway killed it f*cking dead as Fantine and I’m glad she won. At the same time, I am not excited about two big wins, two years in a row, for already-tiny actresses winnowing down to skeleton size for these roles. I know there’s a case to be made for method acting and I guess, yes, an 18th century French prostitute dying of consumption would be pretty starved-looking. (Though the chicks who played her on Broadway never seem to need to go there.) See also an insane ballerina. But the media frenzy around these weight-loss-for-art stories only reinforces our skewed ideas about what women need to look like to be successful. We do not get this lathered up when male actors change their body shape for a part, period. It also gets in the way of appreciating the fine acting these women are actually doing because instead of talking about the interesting choices they made with their brains, we’re thinking, as usual, that women are their bodies and not much more.

I like Family Guy and I wanted to like this. I even laughed a lot at the “We Saw Your Boobs” song — and I’ll stand by that one because I think there is maybe a feminist interpretation to be made about the Los Angeles Gay Male Choir singing that song. It could be a satirical comment about how overexposed and objectified female actresses have become (see above)? Yes? Maybe? Unfortunately, everything went downhill from there and when he started relying on cliched, completely unfunny cracks about “every woman’s innate ability to never let anything go,” we were done. Over to Tina and Amy, please. I think we already established that they should host everything forever now. What more proof do you need?

Clearly, she’s gunning for a talk show and that’s why she had to get all cheesy and heart-to-heart with every celebrity on the red carpet. But did she have to keep taking her shoes off to show us how short she is? Again with the “look at my body, not my talent” theme. The most awkward moment was when she randomly asked Hugh Jackman if he thought she weighed less than an Oscar statue. Which is eight and a half pounds. Why is it cute for a grown woman to want to weigh less than my cat?

4. But at least we have Quvenzhané Wallis.

She’s basically the only ray of hope to come out of the whole evening, from carrying that super cool puppy purse on the red carpet to flexing a little muscle when her name was called. I will not speak of what The Onion tweeted about her because they are now dead to me. Except to say: This need to shut down a confident, talented little girl because she’s sassy about her obvious awesomeness and not sitting there demurely like a little lady? This is where the whole problem starts.

PS. Just a gentle reminder that this critique about the celebration-of-skinniness that was the Oscars should not be interpreted as thin-actress-bashing. Nobody needs to go eat a sandwich. (For more, Kate has a great post about this up today on Eat the Damn Cake.) My point is that all of these women (yes, even Kristen) are talented above and beyond their body shapes — and that’s what we should focus on when we’re giving awards for their work.

PPS. Also, Argo was a great movie, but Ben Affleck and George Clooney aren’t helping matters with their utter failure to include a strong (or even remotely memorable) female character. Surely one of those hostage chicks could have gotten some decent lines?

[Image: Those are Katherine Hepburn’s Oscar statues. Just because. Via buschap.]