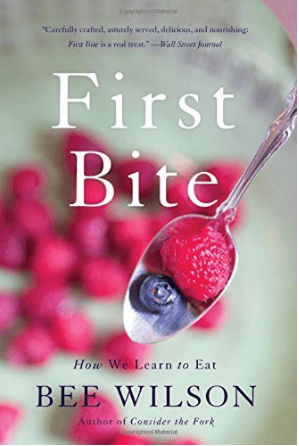 This week, I’ve been reading Bee Wilson’s First Bite, which is the fairly masterful book everybody asks “have you read…?” when I say I’m writing a book about how we learn to eat. This is actually a reread and I am once again dazzled by how poetically Wilson writes about scientific findings. Anyone who has to read medical journals on a regular basis knows that scientific studies are mostly written in the least exciting language possible, but Wilson has a real talent for turning those dense nuggets of research into accessible stories. She also tracks down some of the most incredible early research, like a 1926 study by Dr. Clara Davis, a pediatrician from Chicago, who “borrowed a number of infants” (mostly orphans) and fed them in controlled laboratory conditions for six years, in order to understand how our appetites and food preferences develop.

I’m fascinated by scientific research, but I’m a narrative writer at heart. I want to understand Dr. Davis’s findings, but mostly, I want to go find one of those babies (if any are still living), sit at their grown up dinner table, today, and ask a million questions about how they eat now and how they felt about learning to eat in such a strange and controlled way. But I admire how skillfully Wilson navigates the often murky world of food studies and how she weaves her nuanced understanding of so many different styles of research together to build to her larger point, that our eating habits are learned, and therefore, can be unlearned. (Though she doesn’t claim it’s easy.)

A few other good food reads on my radar:

Time-delayed eating results in better food choices, according to a Carnegie Mellon University study. File under: Great, if you like that kind of thing. I’m an organized person, but meal planning makes me itchy; I’d rather go to brunch on Sunday than spend hours on vegetable prep and detailed white board menus. So I appreciated that even Marion Nestle, patron saint of responsible eating, was quoted saying: “This requires a level of organization and forward planning that would be impossible for someone like me.”

The New York Times ran a piece about Avoidant-Restrictive Food Intake Disorder (Arfid), which gives a decent overview of our newest eating disorder diagnosis (added to the DSM-V in 2013, as a way to distinguish people who eat very limited diets due to fear of food from people with anorexia, who mostly restrict intake due to a fear of fatness). But I was underwhelmed by the cursory reporting on treatment options. Methods like time limits and M&M chasers are reminiscent of the behavioral approach to pediatric feeding problems, which I raised a few red flags about in my NYT piece last year. Unfortunately, Arfid is a condition so in its infancy that nobody really knows what a gold standard treatment model might look like. But, “we shouldn’t have to settle for parents still having to pressure for every bite,” argue Katja Rowell and Jenny McGlothlin, co-authors of Helping Your Child with Extreme Picky Eating on their Facebook page.

At the top of my weekend reading list will be Jane Black’s new Huffington Post piece, Revenge of the Lunch Lady, all about how the “least healthy town in America” turned itself around food-wise, apparently no thanks to Jamie Oliver.

And Eating Towards Immortality, Michelle Allison’s piece in The Atlantic. I’ve long adored Michelle’s blog, and am pretty immediately sold on her dek: “Diet culture is just another way of dealing with the fear of death.”

Want to get these blog posts directly in your inbox? Sign up for my weekly(ish) newsletter, and you’ll get to read this and other cool things, before anyone else on the Internet.