More on Mary Kay: Why The Pink Pyramid Wants You to Have It All

Home Happenings More on Mary Kay: Why The Pink Pyramid Wants You to Have It All

More on Mary Kay: Why The Pink Pyramid Wants You to Have It All 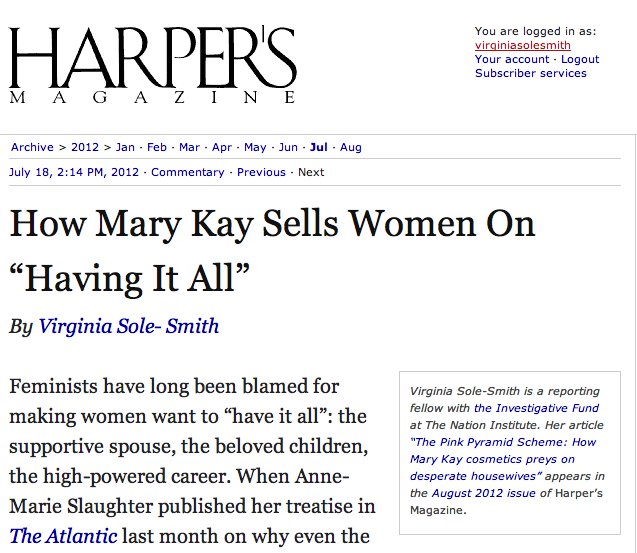 As a follow-up to yesterday’s announcement about my article, The Pink Pyramid Scheme (which, annoyingly, is behind a paywall online right now — I know!), I‘ve written a companion piece that you can read for free on Harpers.org called “How Mary Kay Sells Women On Having It All.”

Because there has been a lot of talk online recently about that whole “having it all” thing — why women still don’t have it, what “it” even is and whether we want it, and so on. And Lord knows, we’re blaming feminists for plenty, but the fact of the matter is, Mary Kay Ash started promising women economic independence and empowerment back in 1963, way before power suits were trendy. But even as she built up the idea of having it all (and even later wrote a self-help book by the same name), she held firmly to the Mary Kay company motto: God first, family second, career third. Which neatly traps women in traditional gender roles, meaning your only path to empowerment is one that leaves the status quo tidy and intact.

So more on all that — and my story! — over on Harpers.org right now. I’d love to hear your thoughts.

Anne-Marie Slaughter, Harper's Magazine, Harpers.org, having it all, mary kay, Mary Kay Ash, Pink Pyramid, pink pyramid scheme, pyramid scheme, The Atlantic, you can have it all