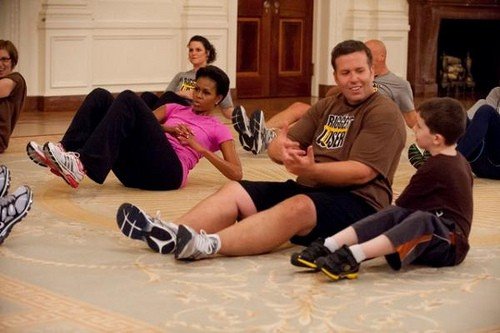 Longtime readers of this blog will know that I am usually a pretty big Michelle Obama fan. I’ve defended her right to wear un-American fashion designers, because she’s the First Lady, not First Barbie Doll. I had a whole lot of feelings when Rush Limbaugh called her fat. And there is a lot about her MyPlate program and the whole Let’s Move campaign that is just great.

But then, last month, Michelle Obama went on The Biggest Loser. And that’s where she lost me.

Because TBL is a show that glorifies pretty much everything we’re doing wrong about obesity in this country. It’s about getting thin at any cost. It’s about no pain, no gain. It’s about public humiliation. It’s definitely not about health, no matter what the coaches scream as “motivation.”

My friend Ragen Chastain, the amazing fat dancer and activist, has written a wonderful piece explaining exactly why Obama’s decision to appear on TBL was a mistake. I’m reprinting it here with her permission because she’s had trouble getting traditional media outlets to publish it (they’re afraid of pissing off the White House — really, guys? First Amendment, anyone?) and we need to get the word out. Just because a show glorifies weight loss doesn’t mean it’s good for your health.

When I heard that Michelle Obama was going on The Biggest Loser to congratulate the participants on being role models I knew that I had to do something.  So I e-mailed my friend Darryl Roberts, filmmaker of America the Beautiful 2: The Thin Commandments. We wrote a well-researched article pointing out the problems with Mrs. Obama endorsing the contestants as role models.  That article is below.

It wasn’t meant for this blog, but it’s now been turned down by three major media outlets.  Not because they disagreed with us, in fact all three said that they agreed with the article.  It was denied in all three cases because the White House wouldn’t like, they were worried about damaging their working relationship with the White House, and it it made the First Lady look bad and out of touch.  That confused me since I think the problem is that the First Lady IS out of touch, not that I’m pointing it out. And why does the media believe that, in America, we should be scared to question our government?

So I’m using my little forum here to get this out.  But before I do, I want to make an invitation:

Michelle Obama – have lunch with me.  I believe that you are a good person and that your intentions to improve kids’ health are good, and I don’t believe that you intend for the media to be too scared to publish pieces that are critical of you.  I’m a champion athlete, a trained researcher, and a real live obese woman and I think that a good place to start is for us to have a conversation.  Tell me where and when you’d like to have lunch and I’m buying.

In the meantime, here’s the piece that the media was too scared to publish:

By Darryl Roberts and Ragen Chastain


DARRYL: I have had the opportunity to get to know Health at Every Size proponent Ragen Chastain after interviewing her for my documentary America the Beautiful 2: The Thin Commandments.  I was coming home from a screening of the movie when I received an email from Ragen alerting me to the fact that our first lady Michelle Obama was going on The Biggest Loser to proclaim the contestants as role models.

I will admit that initially I didn’t quite believe this. The Biggest Loser is a show that’s exploits a very dangerous aspect of American life, the unhealthy ways in which we attempt to lose weight. Surely the First Lady had to know this. But it turned out to be true and, knowing what we know about health and weight, Ragen and I decided that we had to respond.

Mrs. Obama, we know you love our youth as much as we all do and that you want to see them healthy, but we would ask you why you chose a game show like The Biggest Loser as a platform to promote “getting healthy,” and why you continue to push weight loss even though it doesn’t meet the criteria of evidence based medicine.

Have you vetted what happens to some the contestants one of two years after the show?

The New York Times did some digging and this is what they found:

“The Biggest Loser has produced some amazing results for its obese contestants, but at what cost? Many see the pounds come right back, and it’s likely because they engage in dangerous, damaging behavior in the first place in order to win the weight-loss reality show, the New York Times has learned. Season one’s winner, who’s almost back to his original weight of 330 pounds, dehydrated himself to the point of urinating blood. “I’m just waiting for the first person to have a heart attack,” says a doctor.

This season’s first episode resulted in two hospitalizations, which is scary given the content of a release form obtained by the Times. It reads: “No warranty, representation or guarantee has been made as to the qualifications or credentials of the medical professionals [on the show].”

Shockingly, contestants who talk about being completely inactive sometimes for years have to attest that they are “in excellent physical health”. And while the Times got some tidbits — contestants apparently work out in as much clothing as possible when the cameras are off — few were willing to talk. After the paper started digging around, former contestants were emailed a reminder of the serious consequences that come with unauthorized interviews: fines of $100,000 to $1 million.”

A lot of our youth actually start off exercising and eating better. But when they don’t see the “desired result” on the scale, they stop because they mistakenly think that if their healthy habits don’t lead to weight loss then they can’t lead to health.

From my travels with the film and Ragen’s work as an expert speaker on Health at Every Size, we can produce health professionals from Harvard, Princeton, Michigan State, the University of Denver, UCLA, who will tell you exactly what we’re telling you.

RAGEN:  This is an illustration of good intentions gone horribly awry. Calling these contestants good examples of health and fitness is deeply problematic. There are already firsthand accounts of Biggest Loser contestants being encouraged to engage in incredibly unhealthy behaviors, including working out against doctor’s orders, and manipulating their weight through dehydration.

According to Golda Poretsky’s interview with former contestant Kai Hibbard:

“They start teaching you that because you are overweight you are sub-human …There was a registered dietician that was supposed to be helping … but every time she tried to give us advice … the crew or production would step in and tell us that we were not to listen to anybody except our trainers.  The doctors had ordered us to take [a solution to re-balance our electrolytes] and the trainers were like, “Throw it out, right now.”  So I got to a point where I was only eating about 1,000 calories a day and I was working out between five and eight hours a day …   And my hair started to fall out.  I was covered in bruises.  I had dark circles under my eyes … My period stopped altogether and I was only sleeping three hours a night.  I tried to tell the TV show about it and I was told, “Save it for the camera.”

Exactly what’s wrong with the “lose weight” to be healthy approach?

RAGEN: Teaching kids about healthy eating and helping them develop a lifelong love of movement are excellent intentions.  Focusing on the weight of kids in order to do that is simply horrible execution.

The National Institutes of Health (NIH) stated recently that a program that shames kids carries  “a great risk of increasing stigma for those children who are overweight or obese which, in turn, can reinforce unhealthy behaviors (e.g., overeating),” and also said:

“Studies suggest that overweight children who are teased about their appearance are more likely to binge-eat or use unhealthy weight-control practices, and weight-based victimization has been correlated with lower levels of physical activity. Not surprisingly, stigmatization of obese individuals, particularly adolescents, poses risks to their psychological health.”

Hospitalizations for eating disorders in children younger than 12 years old rose by 119% from 1999 to 2006 according to a report issued by the American Academy of Pediatrics (AAP) published in the journal Pediatrics.

It’s not just that focusing on kid’s weight might hurt them, it’s also that it doesn’t help.  According to research from the University of Minnesota “None of the behaviors being used by adolescents (in 1999) for weight-control purposes predicted weight loss[in 2006]…Of greater concern were the negative outcomes associated with dieting and the use of unhealthful weight-control behaviors, including significant weight gain.”

Meanwhile there is not a single study that shows that weight loss works for more than a small fraction (about 5 percent) of people.  The cold hard truth is that there is absolutely no evidence that supports the idea that the majority of fat people can become thin through diet and exercise.

Is There a Solution?


RAGEN:  Absolutely.  The fact that I’m a healthy fat athlete isn’t a surprise or a paradox, there are lots of us.  A great deal of evidence (Matheson et. al., Wei et. al, the Cooper Institute etc.) points to the conclusion that healthy habits make healthy bodies in a wide variety of sizes.

The worst thing is that all this focus on the weight of individuals is distracting us from the systemic issue of lack of access.  Many people do not have access to the healthy foods that they would choose to eat -including foods that are not genetically modified or full of hormones or government subsidized high fructose corn syrup.  Many people do not have access to safe movement options that they enjoy, or to affordable evidence-based health care.  But as long as we focus on little Johnny’s BMI, we don’t have to address the real problems here and we can just keep shaming and blaming fat kids and adults and misinforming them and everyone else about the odds of becoming permanently thin.

We admire Michelle Obama and we believe that she is a strong woman.  In fact, we believe that she is strong enough to step up to a microphone and say “I truly believed that I was doing the best thing for kids’ health.  I now realize that I was wrong, and I am going to lead the charge in fixing it.  We are going to start focusing on supporting the development of healthy behaviors, and access to healthy safe movement options, and affordable evidence-based healthcare for kids of all sizes, and we are going to stop focusing on the weight of any kids at all.”

We look forward to seeing it.

So that’s the article that was “too controversial” for three major media outlets.  I’ll end the way I started. Mrs. Obama, I’d like to take you to lunch. No need to spend government money – I’ll come to Washington DC at my own expense, we’ll go to lunch and I’m buying.  I think that we both believe in giving our citizens the opportunity to achieve their health goals and I think that if you are trying to eradicate obese people, it is worth talking to one and seeing if we can learn from each other.  What do you say?