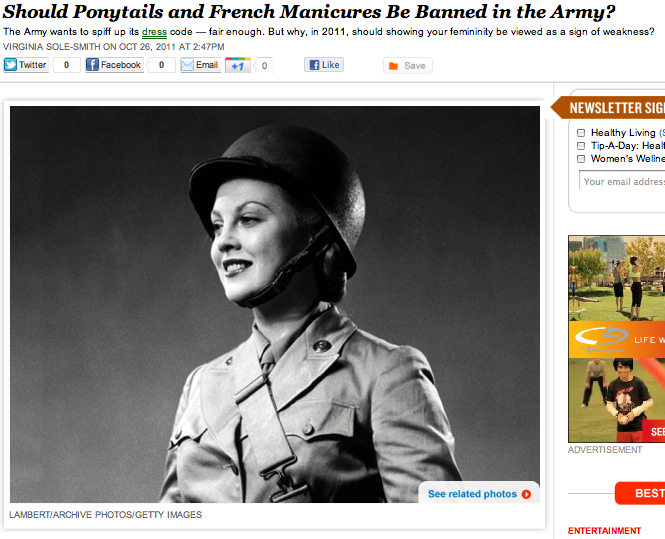 Before we get too in a lather over this one, I should make it very clear that all of the news/blog coverage on whether French manicures and ponytails belong in the Armyhas spun out over a Facebook  discussion led by Sergeant Major of the Army Raymond Chandler. They haven’t actually banned anything yet. It’s just a lot of talk.

But on the other hand, it is a lot of talk, from private soldiers and officers of all ranks. And some of it reveals some pretty disturbing thinking about the role of gender in the military, and what you have to do to come across as a “powerful woman” (Hint: Step one seems to be “don’t look like one.”)

And this talk is happening today in enlightened, post-Don’t Ask Don’t Tell 2011. When women are expected to go into combat any day now. (Or at least, they will just as soon as the Pentagon can be asked to file the report saying so — it missed the April 15 deadline and asked for an extension.)

So let’s go ahead and get lathered, shall we?

Here’s my take on the issue, over on iVillage. What’s yours?