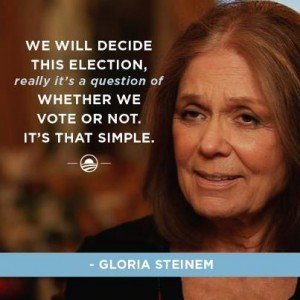 Four years ago, we danced in the streets. Literally. I lived in Harlem in 2008 and when Obama won, you didn’t have a choice — everybody flooded out of their buildings and ran to 125th Street to watch his acceptance speech on the Jumbotron. Black, white, old, young. Strangers were hugging. City bus drivers honked their horns in time to the cheering. I called my dad (who is a professor of civil rights and constitutional law) in Philadelphia and held the phone up to the roaring crowd so we could both hear what history being made sounded like.

Here we are street dancing. 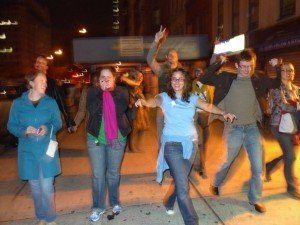 And here is the sign someone stuck up in a little neighborhood shop, which still makes me cry: 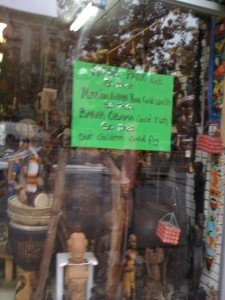 All our photos from that night are blurry because we were too excited. If you can’t read that, it says:

Our children could fly.

No matter what happens tonight, I know I won’t be street dancing. (For one thing, we live in the country now. And our neighbors are in their 80s and go to bed at 7.) This election isn’t like that one and it’s easy to focus on what Obama hasn’t gotten done. When I look at these pictures, it feels almost absurd that we were ever that hopeful.

But let’s focus on what he has gotten done: The Lily Ledbetter Act. Something that, while far from perfect, is closer to national healthcare than we’ve ever had before. Support for gay marriage. (And oh yeah, saving the automobile industry and getting that Bin Laden guy.)

Meanwhile Mitt Romney and the current Republican Party would be “delighted” to ban all abortions (yes, even in the case of rape, but don’t worry because rape doesn’t make babies, remember?), decimate food stamps and welfare (programs that are already not robust enough to help the 20 percent of American kids going hungry) and generally set our civil rights back 50 years. People love to say “it doesn’t matter who you vote for, just be sure to vote!” But sorry, it does matter. There is a clear difference here, folks. And today, “undecided” is simply code for “uninformed.”

In 2008, we probably were a little naive. We thought we’d elected a superhero. Instead, we elected a president. And now we need four more years (and then at least four more — Elizabeth Warren 2016!) to get the job done.