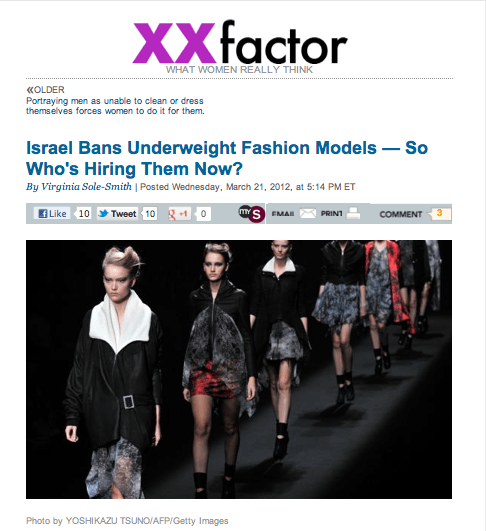 I’m back on Slate’s XXfactor blog, with a piece about what these bans on underweight models might do to the models themselves. Of course the hope is: Allow them to keep working, now at a healthy weight. But that assumes the fashion industry will all fall neatly in line and start championing the health of their young workforce — which is pretty much the opposite of what’s happened so far anytime anyone has attempted industry reform thus far. (See Marc Jacobs refusing to check for underage models last month for the case in point.)

Don’t get me wrong: I’m mostly happy about Israel’s new law, because it means heavily Photoshopped media images will have to carry disclaimers and advertisements won’t be allowed to glamorize unhealthy levels of thinness (and with that, one extremely narrow definition of beauty). I just don’t think it’s the ideal or most comprehensive solution because we’re talking about a systemic issue fueled by layers of profit margins, bottom lines and heavily entrenched beauty ideals. It would be nice if the “banning skinny models” clause of the legislation was accompanied by some effort to afford those young women the kind of workers’ rights and protections they so desperately need — as the Model Alliance is fighting to do with their bill of rights and other efforts.

Here’s how their founder and director Sara Ziff explains it:

We cannot promote healthy images without taking steps to promote healthy bodies and minds, and that starts with giving the faces of this business a unified voice. By giving models a platform to organize to improve their industry, the Model Alliance aims to enhance the vitality and moral standing of the fashion business as a whole. Correcting these abuses starts with seeing models through a different lens: not as dehumanized images, but as workers who deserve the same rights and protections as anyone else.

Yep. That’s pretty much it.

Thoughts? How would you like to see the modeling industry regulated — or not?