Do We Have Secret Fat Envy?

Home Uncategorized Do We Have Secret Fat Envy?

Do We Have Secret Fat Envy? 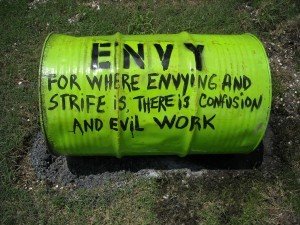 Rebecca DiLiberto (producer/executive editor of The Ricki Lake Show, which my inner ’90s child is randomly a bit excited about although I usually consider myself strictly an Ellen girl) has a post up over on Huffington Post called Why You Can Have Everything You Want (Even Though You’re Fat).

But DiLiberto actually posits a more interesting notion: “One of the reasons skinny people make life so difficult for fat people is that they’re jealous.” My head made a tiny record scratch noise when I heard that, and I bet yours did too. After all, we’re conditioned to believe that it should be the other way around. Raise your hand if you’ve ever heard a skinnier-than-you friend express some form of “I’m so fat!” and immediately thought, “if she hates her body, what on earth can she be thinking about me?” Right.

Now, admittedly, this is an op-ed. DiLiberto hasn’t dug up some sort of placebo-blind controlled study proving that thin people carry around this huge pile of fat envy, and it would be painting with an awfully broad brush to say they all do. But I will say this: Every time a new study comes out showing what skinny people do to stay skinny, I wish somebody would ask them how they actually feel about their bodies while doing this.

Case in point: The Centers for Disease Control’s annual National Health Interview Survey just reported that women who study nutrition labels tend to weigh about 8 pounds less than women who don’t evaluate the nutrition content of their meals. Every media outlet — even Jezebel! — interpreted this finding to mean “hey, we should all be reading a lot more nutrition labels.” And I’m not saying reading nutrition labels is inherently bad (I do it myself).

But here’s what the study didn’t ask the label readers: If checking fat grams made them feel super guilty about eating that donut? If their need to total up calorie counts and sugar content stems from negative feelings about their bodies? If the information they glean from labels ever caused them to restrict food in an unhealthy manner? If occasionally they’d like to take a break from constant label-reading vigilance and try listening to their bodies to determine what to eat?

So yeah. Being envious of people who don’t appear to obsess over this stuff even if it means they’ve forsaken being thin? I can see it.

But to whatever degree it is true, I can’t say I’m exactly happy about it. This is why I tell women not to indulge in skinny women-bashing of the “go eat a sandwich” variety. Nobody wins when we have one group of women enviously assuming that another group has it so damn easy just because they wear a different jeans size. And of course, lots of fat people don’t actually eat whatever they want/do derive self-esteem from clothing labels/etc — just like people of all sizes get caught in these traps.

But what I like about DiLiberto’s post is that we’re establishing the possibility that you could eat what you want, derive your sense of self-worth from something other than a clothing size and refuse to live by everybody else’s rules. And really, you can do this no matter whether you’re fat, thin, or somewhere in between. We can all choose to opt out of the preconceptions. DiLiberto concludes:

And I love that. But I’d replace “you can be… fat” with “you can have your current body.” And you can still be all of those things.

[Photo: “Seven Deadly Sins by Rox Steady” via dingler1109’s flickr photostream. A little intense, I know (and actually about Louisiana oil spills) but I didn’t want one of those terrible stock photos of a skinny girl looking mad at a fat girl or vice versa. Because, oy.]