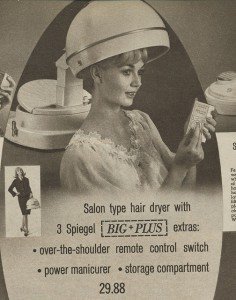 Lots of salon workers and customers reported all kinds of unhappy symptoms as a result of working with the product, but of course, the beauty industry had some hairs to split about it, even though their own textbooks and industry spokespeople had said years earlier  that formaldehyde doesn’t belong in beauty products. Ahem.

(More details on the whole debacle in this story I wrote for Health Magazine, now on CNN.com.)

Well. Here we are, two calendar years later and there is finally some good news to report: Thanks to a settlement with the California Attorney General, GIB, LLC, owners of the Brazilian Blowout brand, must now affix “CAUTION” stickers to the bottles of the two products to inform stylists of the emission of formaldehyde gas and the need for precautionary measures, including adequate ventilation. The company must also engage in substantial corrective advertising, make significant changes to its website and pay $600,000 in fees, penalties and costs.

And best of all? They have to stop calling Brazilian Blowout “formaldehyde free” and “safe.” Because it ain’t.

“We commend the California Attorney General’s office for accomplishing what no other government agency in the U.S. has been able to do: force Brazilian Blowout to be honest with salons about the risk of their products. We are also proud that this lawsuit was the first legal action taken by the state under the authority of the California Safe Cosmetics Act of 2005, which forces companies to publicly disclose the presence of cancer-causing chemicals in cosmetics sold in the state,” says my girl, Stacy Malkan, co-founder of the Campaign for Safe Cosmetics and author of the blog Not Just a Pretty Face.

Of course, the settlement doesn’t get Brazilian Blowout off salon shelves. Which means, in plenty of salons, workers will continue to be exposed to formaldehyde, either because their bosses don’t care to heed the new “CAUTION” warnings on the bottles, or don’t think they can afford to take a popular and profitable service off their salon menu when  beauty salons have been hit so hard by the recession. (The industry’s own Salon/Spa Performance Index [PDF] fell to its lowest level in two years during the third quarter of 2011. Translation: Sales are down. Way down.)

It’s also important to remember that while this settlement focused on one particular brand of keratin straightener, there are lots of other brands of “Brazilian-style” keratin straighteners on the market. And independent lab testing has shown that most of them contain unsafe levels of formaldehyde too. Even if they say “formaldehyde-free” on the label. Even if your hair stylist thinks she’s using a really safe product because the rep from the company told her so.

The beauty industry isn’t playing by the rules on this one. These brands are misleading hair stylists and consumers alike, and putting all of our health on the line.

Even though their products have been banned for over a year in Canada, France and other countries.

Even though our own Food & Drug Administration issued a letter in August, 2011, accusing Brazilian Blowout of selling products that are misbranded and contain deleterious substances, in violation of the federal Food, Drug and Cosmetics Act of 1938. Failure to correct the violations “may result in enforcement action without further notice, including, but not limited to, seizure and/or injunction,” states the FDA letter.

So what’s next? The Campaign for Safe Cosmetics and the National Healthy Nail and Beauty Salon Alliance are calling on the FDA to remove Brazilian Blowout products from the marketplace and to ban formaldehyde from all hair products.

You can get more information and support their work here and here. If you’ve experienced any health symptoms after exposure to Brazilian Blowout-style hair straighteners, you can help by writing the FDA a letter about your experience here.

In the meantime, use your power as beauty consumers. When your hair stylist asks if you’d like to try a keratin treatment, say no (nicely!) and tell the salon owner that you don’t want to see toxic products on the salon menu because you’re concerned about the health of her workers.

Have any of you tried Brazilian Blowout or one of its competitors? Any stories to report — good, bad, ugly? Alex and Siobhan, over on No More Dirty Looks, say it ultimately turned their hair to crap, too. I mean, on top of everything else.

PS. Here’s the quickie refresher on why, from my CNN piece:

Some epidemiological studies have linked exposure to formaldehyde over several months with certain forms of cancer, such as leukemia. In the short term, it can cause scalp rashes when it comes into contact with the head; when inhaled (whether you’re receiving the treatment or sitting next to someone who is), it can lead to burning eyes, nose, and throat, and even asthma attacks if you’re prone to them, says Julia Quint, PhD, a retired toxicologist from the California Department of Public Health.