For my contribution to BIWW (why did I just now, on the final post, realize I could have been acronym-ing that all week? Sigh!) I decided to write an update of this old post. I’m kind of sentimental about that piece because it was pretty much the first time — after almost a year of blogging five times a week — I  wrote about my own body and my own body image struggles. And it was a lot to put out into the world. Especially if you’re not naturally a no boundaries kind of blogger. But it turned out to be hugely liberating and — judging by your comments anyway — kinda helpful.

So I updated the piece and am reposting it here — not because I’m in the same place as I was when I first wrote it in October 2010. I’m so not. But because our bodies are still our bodies. They are always changing. And always the same. 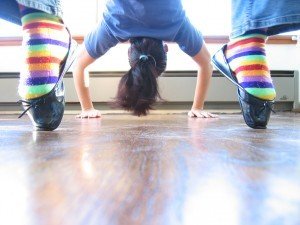 I gained twenty pounds during my ten months in beauty school.

It was pretty much the most ironic thing ever. You go to beauty school to become a Beauty Expert (it said so right on the Beauty U website). You master makeup, facials, hair removal. You also master the art of selling beauty — which mostly involves figuring out what your client is most insecure about (chin hair? back acne?) and promising her that you have the solution.

And while you’re accruing all this beauty wisdom and learning how to enforce Beauty in the standardized, hairless, poreless, perfect way that the industry demands… you (or at least I) get a little fat. And thereby break what seems to be the most fundamental of all beauty rules.

It happened because Beauty U, like so many beauty schools, occupied a particular slice of a strip mall that was just a one minute car ride from McDonald’s, KFC and Dunkin Donuts. We got a fifteen minute break in the middle of our four hour class night — just long enough to zip out for a fast food dinner.

Before Beauty U, I didn’t really eat fast food. I want to explain this without judgment, but it’s very tricky to keep judgment at bay when you’re talking about food, so I’m just going to say it: I’m an organic-eating, farmer’s market-shopping girl who will cook pretty much anything Mark Bittman suggests in his Wednesday New York Times column.

I’m not a rabid calorie counter or a gym geek (though I’ve dabbled in gymming and calorie counting over the years) and I love, love, love to consume plenty of delicious things like wine, chocolate, ice cream, and not at all whole grain pasta dishes. In fact, I love all food. But in a rather particular, have-you-tried-this-artisanal-goat-cheese and ooh-what-about-these-heirloom-tomatoes way. Then I went to beauty school and realized: I eat like a very specific type of upper middle class liberal white person. Who is, very often, pretentious as hell about food.

I wanted to fit in.

I didn’t want to seem pretentious as hell.

Also, hi: McDonald’s Snack Wraps are pretty delicious, especially if you’re eating one for the first time. So I got over myself even if there was a little bit of the patronizing in my “when in Rome” attitude. In fact, it was maybe more “what happens in Vegas…” I knew I didn’t really eat like that when I was being Normal Virginia. So I decided that Beauty School Virginia could do it and it would be no big thing. So what if I gained a few pounds, or my skin broke out? It was in the name of journalism, dammit! And not looking like a dbag preachy liberal!

But towards the end of Beauty U, I started getting fed up with that diet. I’m not saying Snack Wraps aren’t delicious, but they stopped being quite so delicious after I’d eaten around thirty. Then, they started to taste like plastic. Plus I was getting winded walking up a hill and none of my clothes fit.

And so I started saying: “I can’t wait to get my body back.” By which I meant my 145-pound body that could hike up hills without a problem and do headstands and backbends in yoga or even, my 135-pound body that once ran two half-marathons.

It was like I thought someone had come along and zipped a fat suit up over my real body, leaving me with this 165-pound+ version that I couldn’t — or didn’t want to — recognize. Before Beauty U, I’d have told you that I was hands down happier as a size 8-10 who ate pasta and enjoyed life than a size 4-6 who didn’t. But as it turned out, I was not so happy as a size 12-14 who ate pasta and fast food and worked too hard for ten months.

And for the first month or so after I graduated, and life went back to “normal,” I kept waiting for someone to come along and unzip the fat suit so I could have my real body back.

Everyone kept saying, “Oh don’t even worry! Once you stop eating all that junk, you’ll be back to normal!” And yes, there was a quick, five-pound shift that might have been a little bit of that. But mostly, I was just focused on how uncomfortable and not normal I’d become.

But then about two months later, I was at yoga and I did a completely kick-ass back bend. I mean, five-year-olds and tall dogs could have run under the arch shape that was me without having to duck. Everyone oohed.

I still weighed at least 160 pounds. I thought only my “real” body could do cool things like backbends. And my clothes kept telling me that I didn’t have my “real” body back yet.

And that’s when I realized: This was my body, too.

There was no fat suit. In fact, I’d weighed this before, when I worked super long hours in a magazine office. I didn’t eat McDonalds then, but I did eat a lot of late night takeout and never had time to go the gym.

I had decided that it was okay to want my “real” body back because it wasn’t some unrealistic, Hollywood starlet goal. But even if my 145-pound body didn’t perfectly adhere to every ideal of Beauty as we enforced it in the beauty industry, it was a much closer fit than my 165-pound body. So when I said “I want my body back,” what I was really saying was, “I want Beauty’s body back.”

That was 16 months ago. And I still have just the one body. It is still a little bigger than it used to be. That might change or it might not. Sometimes it eats Subway sandwiches loaded with cold cuts and Chipotle Southwest Sauce. Other times, it braises dinosaur kale in extra virgin olive oil.

Either way, it can do a crazy cool back bend. And somehow, it became a licensed Beauty Expert. But this body doesn’t belong to Beauty. Because it is me.

PS. Thanks to Rosie Molinary  and Sally McGraw for featuring this piece on their blogs this week. And big love to Sally, once again, for coming up with the whole wonderful project!

February 27 – March 3 is Body Image Warrior Week. Throughout the course of this week, you’ll read posts from an inspiring group of women who fight hard against body image oppression through their own words and work.

[Photo: Not me. But I couldn’t resist those socks. A Tribute by BrittneyBush]