Awesome Doesn’t Have a Size.

Awesome Doesn’t Have a Size.

Usually, I try to spread the advocacy posts out a bit, so as to not burn you guys out — standing up for things is hard work after all. But this is a blog first and foremost about body politics — and this week, a lot of our core issues hit a boiling point. So we’ve been standing up for salon workers’ health, and for Planned Parenthood and women’s health in general.

And today we’re taking a stand for children’s health. Which really blows my mind because, really? We have to have a debate about that?

This is me and my cousin, Kate Summers. We are participating in I Stand Against Weight Bullying, a grass-roots online response to Georgia’s Strong4Life campaign against childhood obesity.

But wait, you say. Strong4Life? That sounds like it’s all about healthy kids, no? What have you got against that?

Let’s take a look at some of the Strong4Life images, which have been plastered all over billboards around the state of Georgia and run as TV commercials. 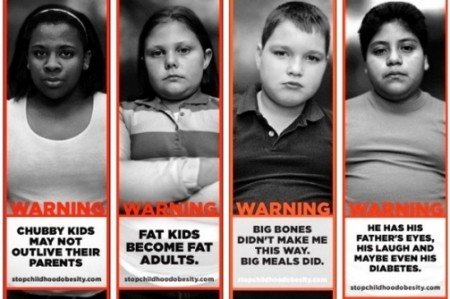 These are pretty bad. Objectifying, stigmatizing and shaming. But they aren’t even what got me so mad about this. That was the one with the slogan “it’s hard to be a little girl when you’re not.” running across a little (yes!) fat girl’s tummy.

Now I think the Atlanta public health folks had good intentions with this campaign. They have sky-high levels of Type 2 Diabetes, hypertension and other health conditions that correlate with bigger bodies — and they’re seeing more of those health problems in younger patients. They want to take action. They want to encourage parents to feed their families healthy meals and take everyone out for a walk or a game of basketball.

So why not make an ad campaign that encourages us all to feed our families healthy meals and take everyone out for a walk or a game of basketball?

Why do we need to point fingers at body types? Thin kids need to be eating well and exercising too. Everybody does. And fat kids don’t need to hear that their bodies make everybody uncomfortable. Chances are, they’re already hearing that on a daily basis — from kids on the playground, from family members, from the world — without a government-funded ad campaign to remind them.

But y’all don’t need me to explain why these ads are terrible. I’ve given my “focus on healthy habits, don’t hate on bodies” speech a zillion times. So instead of reprising that, I thought we should hear from a kid who knows from experience. Enter Kate: “I think it’s good that they’re promoting being healthy, but I don’t like the way they are doing it,” she told me. That’s because Kate, who is 16 now, had to deal with a lot of this crap when she was younger:

As someone who was pretty heavy as a kid, I think about the way I would have reacted back then. I really don’t like the billboards about missing out on a childhood, looking bad, etc. I think that because of this ad a lot of people will start obsessing over their weight at a younger age. I agree with you that they should focus on healthier lifestyle changes instead. Because I may have weighed 125 pounds at age nine, but I could have certainly out-swam my fellow fourth graders!

Kate and I decided that we wanted to take a stand against this ad campaign and for healthy kids of all sizes — because health is about so much more than a number on the scale. Here’s how you can help us:

You can donate to the Big Fat Money Bomb drive, led by Ragen at Dances With Fat today, to raise funds for billboards and print advertisments that will counter these negative messages. They already have $5,000 and only need to raise another $5,000 to buy their first billboard — we can totally do this!

You can also like the I Stand Against Weight Bullying campaign on Facebook, and follow the blog to help raise awareness. And submit your own picture and slogan to be made into a Stand poster like ours.

And please, sign the petition and tell your friends to do the same. Or write directly to the people involved with the Georgia campaign (be respectful! spam doesn’t get us anywhere!) and explain why you find their ads so offensive: